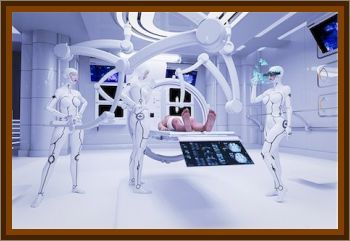 In late 1972, a woman who preferred to withhold her name was subject to a bizarre abduction experience.

While lying on her bed one evening, she suddenly heard what sounded like a low flying helicopter outside her home. As the sound persisted, she began to feel a rattle around the house, before a whirlwind sensation enveloped her.

In a moment, and with no memory of how she got there, she found herself in a strange room with several robotic looking beings surrounding her. They were performing various tests and examinations, and all the while, they spoke to her using telepathy.

She didn’t understand the nature of the tests, but she experienced no pain during them and was not frightened at any stage. She was returned to her room shortly after.

Even more bizarre, and food for thought for skeptics, were the subsequent claims she would make of one of the robot aliens visiting her again shortly after, claiming they had left a piece of equipment in her leg.