You Won’t Remember This 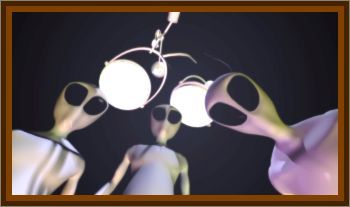 The Robinson family experienced a series of sightings and abductions by gray aliens, culminating in what UFO investigators call a baby presentation.

The main witness, Kelly Robinson, experienced four consecutive visitations over a period of a few months. During each encounter, she was able to converse with the aliens.

On the first encounter, Kelly awoke to find 4 grays standing around her bed. One spoke telepathically, telling her:

Do not be afraid. Come with us. You won’t remember this.

Kelly, however, was a very feisty, independent 21 year old, and like some abductees, she did remember. She recalled being taken into a small round room and placed on a table. They told her:

Kelly screamed at them:

This argument went back and forth, with the aliens telling her she couldn’t and wouldn’t remember, and Kelly screaming back that she would.

They then cut her arm. She woke up the next morning and immediately looked at her arm. A neat 2" scar was exactly where she remembered the aliens cutting her.

We’re going to take your memory.

Kelly again screamed at them:

They told her: No, you’re not. Your parents wouldn’t understand. You better not tell them, you know.

Kelly screamed out that she would tell her father.

The greys said telepathically: No, no, no! You can’t.

A few weeks later, they came again. As usual, they attempted to erase her memory of the incident.

They told her: You’re going to forget everything.

As usual, Kelly had some recall of the events.

I don’t know specifically what they asked me. They were asking me things about what we do, but you know, I can’t specifically say.

You’re going to forget everything. We’re not going to let you remember this. We’re going to take your memory of this away.

On her final encounter, the aliens appeared and said: We need to talk to you. Come with us.

Kelly resisted and threatened to tell her father.

No, you can’t tell your dad.

Kelly Robinson’s mother Diane had an experience which she calls a dream, but is connected to the UFO encounters of her family.

Diane recalls being taken into a room where she was shown babies that were genetically altered.

First revealed by researchers, these rare cases involve abductees who are told to hold and nurture babies that appear to be half alien/half human.

In most cases, there is little information exchanged. Diane, however, was given a brief explanation.

She recalled being taken to a room where she saw a large contraption shaped like a Christmas tree, but instead of branches there were incubators filled with babies. Diane was told to pick a baby and hold it. She refused because the babies appeared to be deformed.

Diane stated: Every one of them had something wrong with them.

And she said it was sad, because it wasn’t planned that way, that they had all these things wrong with them. She said they had everything but love. She said: That’s why I’d like you to take one and love it, They have problems. They are different. But they still need love.

Diane was unable to overcome her revulsion and refused to hold the babies.

Following this experience, all the UFO encounters of the Robinson family ended.