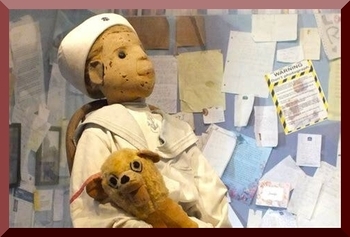 On Key West, an island in Florida, is a bed and breakfast known as the Artist House. This house is one of the historic gems of the island, and is much talked about, both for its architectural beauty and also the ghost that resides there. The house is built on three levels, with the turret room being located as the uppermost floor. This king sized bedroom comes with a warning: a ghost in the room.

A woman in a wedding dress has been seen in the room at the top of the stairs. She slowly descends them before disappearing.

An interesting story in itself, but that's not why we are talking about this house. The house had another, greater story to tell, again of the haunted variety, yet one that has moved on to become a tourists attraction in its own right.

The Artist House where Robert the boy grew up.

Robert Eugene Otto was born in 1900, and in 1906 at the age of six was given a doll by one of his family’s servants. The present was by no means given out of happiness or gratitude by the servant, as she had very recently been fired. The reason for her dismissal from service is said to be her religious beliefs and practices, she performed black magic rituals and upon hearing about this, the Otto family fired her.

The servant, originally from the Bahamas, presented Robert The Doll. It was 3' tall, stuffed with straw, dressed in a sailor’s suit. The face resembled Robert’s considerably, but for the buttons as eyes. It was probably handmade by the servant, and many say that some of the dolls hair was Robert’s own.

This makes sense to some, as the doll was more than just a doll, but also a curse placed on the family by their ex servant.

Robert, known as Eugene or Gene for his middle name, was extremely fond of his doll and the two became inseparable. Robert even gave the doll his name, Robert.

From this point forward Robert the person shall be referred to as Eugene, to avoid confusion, And Robert as the doll.

It was not long before family, friends and neighbors started to notice that there was something not quite right with this doll. They noticed that Eugene would talk to Robert, and that the doll would reply. At first they though it was their son responding to the questions, in a put on voice, but later started to believe the doll was actually speaking.

The house staff would also swear they caught glimpses of Robert’s facial expressions, changing before their eyes, or moving from place to place about the house when they were not looking.

The neighbors told the Otto's that they saw a small person moving about in the windows, when nobody was home and a strange giggle could be heard when people least expected it.

Soon Eugene started to fear the doll. His parents would hear loud bangs and crashes in the middle of the night, and when they went into Eugene’s room to see what was going on, they were shocked to discover furniture had been tipped over, toys mutilated and their son hiding under the covers.

Robert did it!, was the general explanation for the mess.

Often, Eugene would still take the doll with him wherever they went, and it was very uncommon not to see Robert by his side. If Eugene went outside to play with other children, he would prop Robert up on a window sill so he could watch. Eventually, the drama proved too much for Eugene’s parents, who took Robert away from him and placed it in a box in the attic.

When Eugene’s parents died, he inherited the Key West home, the one that's now the Artists Residence from the start of the story. One of the first things Eugene did was to reunite with his childhood friend, and Robert The Doll got his own room, which was Eugene’s room as a child. Eugene was now a painter and author and lived quite well.

Eugene had married Annette Parker while he studied art abroad in Paris. When they moved into Eugene’s family home, after his parent’s death, she took an instant dislike to Robert. Although Annette was a accomplished pianist and performer, she dedicated her time to domestic duties in the home.

All through his marriage Eugene was very much attached to his doll, and soon enough after the reunion, he and Robert once again became near inseparable. This drove Annette a little crazy, especially when Robert started to live in the bedroom with the couple. He would sit in a chair in the corner while they slept.

Annette wanted Robert back in the attic but Eugene would have none of it.

Eugene died in 1974, after which, Robert was placed back in the attic.

Annette moved out but was also dead two years later. In this attic Robert lay lost and forgotten, until he was found by a new family and their 10 year old daughter.

Before long, the new family would have the same troubles with Robert as the Otto’s did. The daughter would wake the house up, screaming, claiming the doll was alive and roaming about the room, causing trouble.

In later interviews with the girl, now a middle aged woman, she claimed Robert wanted to kill her.

Robert was once again moved to the attic, but soon would make a further move to the East Martello Museum where he made a new friend, Leo the stuffed lion. Although he is kept behind glass the museum claims it’s for his own safety, as well as the safety of visitors.

Some staff have claimed that Robert will be found in the morning in a different position than he was left in the night before, on closing. Psychics have also found that Robert has his own aura, nothing evil, but rather that he is misunderstood. This aura has been photographed.

Still, his curse is present and can be put on those who visit him. If you make fun of him, or don't ask permission before taking his photo, bad things may start to happen. In the museum, stuck to the wall behind Robert, are numerous letters written by those who believe they are touched by his curse. These letters ask for forgiveness in the hopes of lifting the bad experiences they have suffered, since not giving Robert the respect he demands. As for the ghost of the artists residence. Annette Parker Otto is thought to be the resident spirit seen on the turret room stairs. This is the room where Robert The Doll lived, and a room Annette hated. Could her hate for the doll, and her attempts to get between him and his owner, have cursed her to spend eternity stuck, trying to flee this room she hated so much?