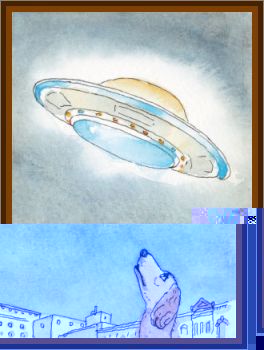 When a man in Riverdale Subdivision got up to let a puppy go to the bathroom outside. The man groggily opened the patio doors and went outside with the 4 month old dog.

The man heard a strange and loud rumbling sound similar to several semi trailers but this suburb was well away from any highway or major thoroughfare.

A bright light rapidly rose up from ground level several miles away, stopped for a second and then shot off into the distance. The sound ceased along with the disappearance of the light. The puppy, startled, ran for cover into the house but bashed into the sliding glass door.

It was shivering for an hour after the incident, had the dog not reacted, I probably would have thought that I was just seeing things from being half awake and would have probably forgotten about the event. I still remember it in my head like it was yesterday, the man remarked.

The approximate year and month of the sighting was determined from the puppy’s age which was still alive during the interview. The family got the Puppy in July, 1996 and the incident occurred several weeks afterwards, July or August 1996. The man lived on Takhini Road and was looking towards the direction of Grey Elementary School near the intersection of Lewes Boulevard and Alsek Drive, towards the southeast.