Possible UFO In A Western Movie 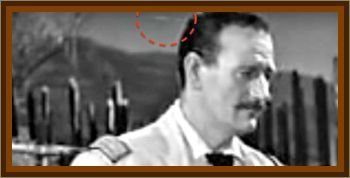 I don't know if this has ever been reported before, so I thought I would pass it along. I was watching a western on tv on 1/19/08. In one scene, an apparent UFO darts into the scene just behind the actors head, at approx. the 11 o'clock position, moving from right to left, stops for a brief moment, and then darts back to the left again, behind the actor's head. It was in the shape of the typical disk type ufo, and was white in color. It is in the scene for about 2 or 3 seconds and then is gone.

The movie is Rio Grande with John Wayne and Maureen O'Hara, and the scene mentioned is the one when he is handing her a Confederate $10 bill.

Now I don't believe I imagined it, of course, and I don't know if it was just a...well, who knows what. But, this is what I saw, so it might be worth checking into.

The move classic Rio Grand, in the scene, between John Wayne and O'Hara where he gives her flowers, UFO moves in from uper left to right behind John Wayne then reappears right to left.