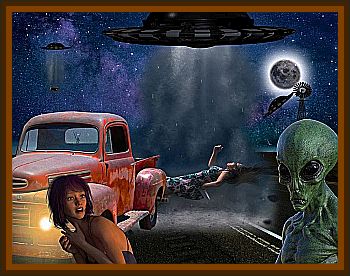 Less than 48 hours had elapsed between the events on Saturday, September 7, 2002 when Cordoba is once again the site of another event allegedly related to the UFO phenomenon.

On this occasion, a family traveling in a pickup truck between the localities of Achiras and Sampachoy were in the vicinity of the Cerro Aspero when they began noticing a very intense red light in the sky, which originated from the southwest, as their vehicle headed northward from the south along provincial route 24.

The time was approximately 10:30 p.m.. The head of the family preferred not to disclose his identity, but told the news media that this is the first time it's happened to us, going on to relate that at no time did his family feel fear, nor was there any nervousness on his part.

If that thing wanted to hurt us, it could have clearly done so.

When asked by researchers about the characteristics of the object witnessed, he explained:

It was like an intense red beam, there were other flashes of great brightness behind it and what drew our attention the most is that the front section of the luminous object had something resembling an arch of light, as though it were a circle of energy.

The younger members of the group of nocturnal travelers stated that they were very impressed.

The sighting lasted for several minutes and the head of the family added:

At a given moment, the object gave the impression that it was about to fall on top of us, but it changed course at the last moment and headed toward the hills of Sampacho and Suco, we passed by the Chanaritos region always, looking at it toward the southwest. Then we crossed the Ancias area and by the time we reached the crossroads of the highway leading toward Laguna de Suco, it was as though the light had become lost in the sky.

For some years now, this region of southern Córdoba province has been the source of anomalous nocturnal manifestations, but anomalous luminous phenomena has intensified greatly as far south as the province of San Luis, to the west. But southern Córdoba has witnessed an intensification of alleged UFO manifestations in an area that includes regions and communities which include Adelia María, Carolina, Punta del Agua, San Basilio, Suco, Sampacho, Chaján, Achiras, Río Cuarto, Cuatro Vientos, Las Albahacas, Villa El Chacay, Alpa Corral, Las Vertientes, Pavín, Huinca Renancó, General Cabrera, Elena, and which not only occupies an area to the southeast and west of Río Cuarto, but rather, extends northward toward the northern reaches of this last city, as is the case with General Cabrera and Elena.

This incident can be added to the ones already known, although there is still the question of various different versions [of the experience]. It is currently being investigated by Círculo Ovnilógico Riocuartense, headquartered in the city Río Cuarto, Córdoba. At least three significant cases have been reported:

The second of these cases is the one in which the witness claims having stood some 30' to 36' away from an object which he reckons was 600' long.