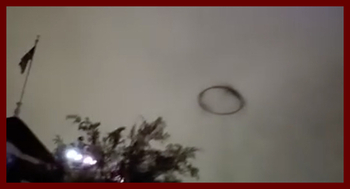 Three children observed a round object with 3 rings like donuts stacked one on the other moving directly overhead.

The object seemed to be high when first sighted to the north.

The object paused momentarily and appeared to descend slightly, then ascend and continued on course to the south at a fast rate of speed.

It was observed for 2 to 5 minutes. A check with the Washington Air Defense Sector revealed that there were no aircraft under their operational control at the time of the sighting. The area was scanned by a AN/FPS-6 height finder radar 45 minutes after the sighting.