Yellowish Rectangle Hanging In The Air 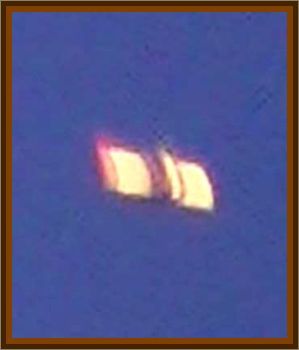 My girlfriend Leigh and I had been out for a ride on my motorcycle and on the way home were north bound on Highway 99.

We had just come out of the tunnel when I happened to notice a large yellowish rectangle hanging in the air above University of British Columbia, which would put it just north of the airport. At first I thought it must be some sort of reflection on my helmet visor but after shaking my head back and forth and lifting the visor, it was still there.

I pointed it out to my girlfriend and she confirmed that she also could see it.

We continued to keep glancing at it all the way across Richmond, and I had hopes of getting home and taking a better look through binoculars but just as we approached the south end of the Oak St. bridge we could see what appeared to be the shadows of people moving about inside and the opening suddenly began to close, it was just like a door had swung shut and then it was gone.

We both had the impression that we were looking through a doorway into some sort of large room but whatever we were looking at was completely invisible from the outside. Whatever the door belonged to must have been huge, as we were probably 10 miles away when I first saw it.

I would estimate the opening to be somewhere between 50' to 100' in height, by comparing it to the size of the trees below it. I doubt that it was more than 500' in altitude. The weather was clear and sunny and it was approx. 18:00 hrs.