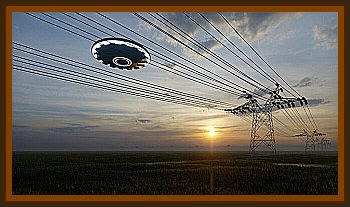 I've seen 2 UFOs in my life. The 1st was way back in Anglesey, North Wales, UK in 1965 or 1966. We were driving on a rough forest track from Newborough in Anglesey, to Llanddwyn beach. It was late summer and it was about 6:00 p.m. in the early evening.

There is a lot of Air Force association with this part of the UK, and we were not far away from military No Go sites. Lots of the beachhead further along is used by the Air Force.

Then out of the blue, came a very large triangular shaped object, and I could see that it was very low over the trees and was obviously following us. It made no sound, and there were red lights flashing around its edge. It stayed with us until we reached the beach and then it shot off along the beach and disappeared.

The next day I telephoned the R.A.F. station and they said that they would come back to me once they had checked if there were any planes about at that time. They did come back to me, and there was not anything that they knew about in that area at that time. They confirmed that it was a UFO, and that other people had phoned in to say that there were sightings over Bangor city through that particular week.

The 2nd time I saw a UFO was in 1975, and this was on a particlarly stormy evening. I was out with my small son and our dog, taking a walk on the mountain track that lay to the rear of our house. I saw a cigar shaped object hovering over a large aerial that was on top of the mountain.

Even though the wind was very bad and there were black storm clouds, the object was static in the sky over this mast. I believe that the aerial or mast is used for radio and TV signals.

The object then shot straight upwards at fantastic speed and disappeared out of my sight.