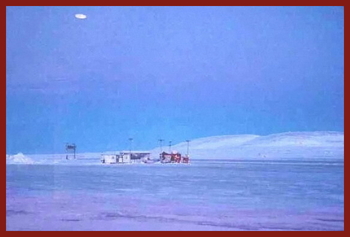 After my visit was complete we departed Cornwallis Island and flew to Resolute. We had about a 3 hour wait for our connecting flight to Nanisivik. So we stayed in the airport and waited for our plane to show up.

On a previous project, I had purchased a new Sony digital top of the line camera and I had this with me for the site visit to document an area where I was going to.

I took several shots of the surrounding airport terrain and when I got back to the office a week later I went through the 100+ photos. To my surprise picture #97 had an object in the background. This shot was taken at about. 12:45 p.m. in the direction of the end of the runway.

I have enlarged this photo and examined it in many ways. It sends a little chill up and down my spine every time I look at it.

My friends and work colleagues are speechless. Those that do not believe in UFOs don’t know what to say or can’t.

I pointed at the end of the runway and took the shot, what was in the shot as I said was discovered later.