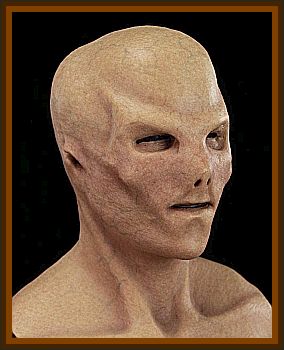 3 young children were playing on a waste ground just off Longford Road West near an old railway line. They were around a hut which had been constructed for them by a neighbor.

The girl, Susan, was tired and thirsty so she went into the hut to make herself and the boys some orange drinks. The boys remained outside playing by some bushes. The boys saw a flash of silver pass before their eyes, and heard a crackling noise coming from the direction of the bush.

Looking in the direction they saw a strange figure emerge from within the bush. He was wearing a silvery one piece suit, seemed human in appearance but had a short gray beard and long yellowish hair. The boys stood aghast because he was floating about 6" off the ground.

The figure was only visible for a few seconds, and then it just vanished. John, one of the boys, said:

It was like a light bulb being switched off, one minute he was there, the next he was gone.

Meanwhile Susan was in the shed totally unaware of all this. As she completed the drinks she heard a strange rustling sound. Looking up out of the window she found herself staring face to face with a strange man who was not more than a few feet away. He was behind the boys, so out of their immediate sight, for they were still looking towards the bush. Susan did not know this man, so she stared back at him.

Then he looked away from her and took a small hand shovel from the belt he wore around his waist. He proceeded to stoop down and dig up small bits of soil, pouring each shovel full into a see through kind of plastic bag. There were several of these out around his waistband. By now she was getting frightened, as she had no idea who this man was, or what he was doing, and he did look a little odd. So she yelled out instinctively to the boys. As soon as she did this the man vanished into thin air. When the boys turned around he was not to be seen.

In height he was similar to Susan and John’s father, 5' 9". His complexion was very pale, and his eyes were long and narrow and slanted a bit, like a cat’s. The silvery suit was like a track suit and seemed to be elastic at the bottom. There were 4 or 5 buttons running down the middle of the chest at the top. The hands were covered with silvery gloves and the footwear consisted of boots with thick black soles on them.

Unafraid, the children decided to look to see if they could find him again.

They walked forward a few yards towards the fence surrounding the school and they saw that in a few moments spotted him again. He was stooped down by the fence, seemingly collecting more samples. He seemed unaware of the children, and continued for a few moments this time although they remained some yards away.

Then he disappeared again, only this time John and Susan said he seemed to go down into the ground and just vanish. The children now walked towards the spot where he had been and saw an object rising slowly from the ground, apparently within the playground of the school.

It was a medium sized object shaped like a gently curved disk with a more or less flat bottom. It was silver but had 4 dark holes, windows, at the top in a row, and a couple of dark blotches on the bottom in the middle. It rose slowly and then moved horizontally heading south southeast to disappear in the direction of Tennyson Road, still quite low.