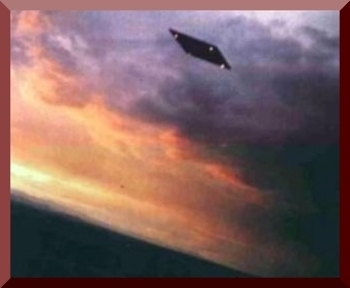 I didn't see this sighting myself, it was seen by my two elder brothers in the fall of 1968.

I remember as a kid of about 6 years old, they ran into the house yelling at our parents saying they'd seen this colorful object in the sky which they called a Flying Saucer.

In the 60's, anything out of the ordinary in the sky was termed Flying Saucer. But over the years, after hearing both their stories, this thing was anything but a Flying Saucer.

Here is what they saw:

Both my brothers, about 12 yeays old, were in the street playing with a friend. The elder of my brothers noticed an object in the sky that didn't look like a plane, he pointed it out to my 2nd elder brother and their friend.

There was a football match going on in a field about 150' away, and there were actually two police men amongst the spectators. According to my brothers, this object was rectangular in shape, about 50' square in dimension,at an altitude of about 1000', only an estimation, the object had portholes and was silent.

But as a kid, what struck me most was the fact that my brothers said the object constantly changed colors, throughout the spectrum.

Recently, I quizzed both my brothers on the incident, this gave new elements to their story. Apparently, the craft was not perfectly rectangular, but the bottom of the craft resembled the hull of a ship. Also, after about a minute in a stationary position, the craft fell. In the words of my brother:

As if you let a feather drop from your hand.

The curve/or trajectory then sent it east in the direction of Wales in the UK.