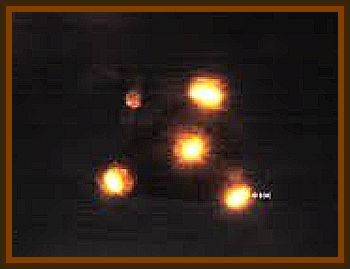 Photo of a triangle UFO taken during the 1989-1990 Belgium UFO wave, during which many people observed large triangle craft. The photo was allegedly made at the beginning of April 1990.

The photographer‘s girl friend saw the object and gave him notice. Limited details are available about the sighting or the photographer.

He had a roll nearly finished in his apparatus and made the 2 last, numbers 35 and 36. Then he sent the roll to a lab which was offering cheap prices. When the roll came back, only 35 was good, there was practically nothing on 36.

P.M. showed the 2 photos to several people working with him, they have been found back and have confirmed, and then threw away number 36. One of his colleagues, Mr. L.R., spoke to a press photographer, who bought the copyright. Mr. L.R. and other colleagues have confirmed this part of the story.

Then the photo appeared in the press, a couple of months after it had been made.

Questions have been raised about whether the photograph is a hoax, obviously only detailed information about the photographer can qualify this. However, if it is a hoax, it is difficult to determine how it was made, and, particularly, how the unusual texture of the lighting was achieved. If not a hoax, this is a photograph which reveals many details of UFO luminosity, and it must be considered essential to an understanding of that subject.

Assuming the photograph to be real, the luminosity seems to show a core brightness with a smooth contour. This core is enveloped in a semi transparent luminous envelope, which varies in brightness and opacity. These variations seem to take the form of ribs of irregular but somewhat periodic spacing.

The object may be making a rotational turn, pivoting approximately on a point between the center light and the point at the top of the photo. This would account for the apparent twist of the striations on the top and front areas, and the linear appearance of the bottom patterns. The camera may not have been perfectly steady during the exposure which may have caused the jagged appearance of some of the striations, especially at the nose, or the nose may have wobbled during the manuever.

However, the irregularities are not as parallel as they would be if they were completely generated by a camera movement or a smooth movement of the object. This may indicate that the striations themselves varied over the time of the exposure. One strand in particular seems to be separated from the rest of the luminosity.