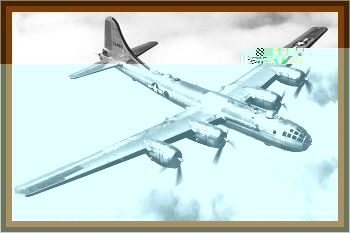 Location: Over Atlantic Ocean, about 250 miles SW of Bermuda Island

USAF pilot and crew of RB-29 bomber in the 373rd Recon Squadron based at Kindley AFB, Bermuda, on classified Atomic Detection System service, was searching for a lost BOAC aircraft.

At 12:25 a.m. B-29 turned toward the light and by 12:40 a.m. approached so close, at estimated 100' to 150' distance at 6,000' altitude, that pilot made a sharp bank to avoid collision. B-29 crew unable to take nuclear fallout sample of air around red glow because in haste to take off on search mission they failed to bring filter paper.

B-29 circled the red glow from all directions for 44 mins as the glow slowly moved, at about 10 mph headed W, when they finally departed the area at 1:24 a.m. Red glow still visible on landing in Bermuda at about 2:10 a.m.