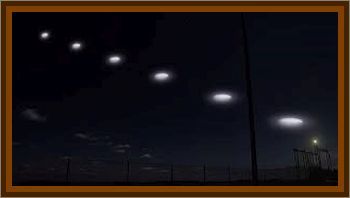 I know this incident happened, and I believe he is telling it the way he knows it. Additional information on an incident that took place at an Minuteman 1b silo at, Ellsworth AFB, SD.

At that time the launch officer in charge of that site dispatched a strike team consisting of 2 Combat defense Team Members to investigate the intrusion at the silo.

At the time of their arrival they saw a flying saucer sitting on top of the launch tube door of the missile site, with small objects around the security pit.

I don't know what happend at that time, but what I do know is that the strike team left the site at a high rate of speed, down a very narrow 1 lane dirt or gravel road,with a spot of light paralling them. At some point they lost control of the pick-up truck they were driving, and rolled the truck totaling the blue truck they had been driving. I do not recall them being killed, but I believe that they were hurt.

I personally saw the truck after it was wrecked. It was totaled.

I was one of them. I saw no UFO's only satellites.

I also know that another maintenance team was dispacted to the silo in question. for what, I have no first hand knowlege why.