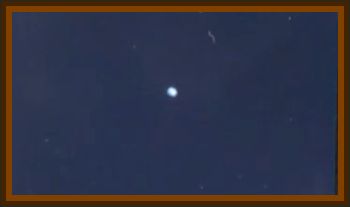 During a work week, I was sitting in my backyard in Randsburg, watching the sun set.

My attention was focused on a bright star in the sky, which, I presumed to be the North Star at about 9 o’clock high/southeast direction.

As time elapsed, I realized that it could not be the North Star. Other stars in the sky became clearer as the Sun set.

For almost 2 hours I tried to figure out what star or planet it could be. It became the brightest star in the night sky and all the other stars paled in comparison.

Then the star glowed and then moved further southeast then stopped.

It appeared to have moved only a few inches from my perspective. Although, I knew it had to be a few hundred miles as it appeared to be in the upper atmosphere.

A shooting star zoomed across the big star’s old trajectory. As soon as it had, the big star glowed again and then in what seemed to be mach speed, darted into hyperspace further southeast direction.

Obviously, this scared me and I grabbed my belongings and left.