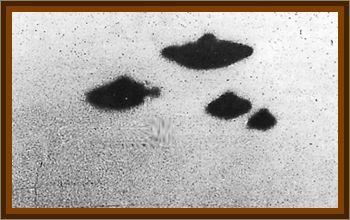 I was on the Panamanian ship Eagle. It's call sign HOOF. Perhaps some of my colleagues will remember me, especially on the British Guiana Coast. I would like though to go back a little to 1954.

About then I read a book 'Flying Saucers Have Landed,' lent me by a fellow radio officer. I became interested in UFOs, but had an idea that it was all a hoax. I soon changed my mind about that.

We had been on the way to Philadelphia from Rotterdam. At about noon we heard an ear splitting noise and whistle, followed by a thunderous roar. It all lasted a few seconds. Everything on board shook from vibrations caused by the noise. When we rushed on deck, there was nothing to be seen.

At that time on the bridge were the Master, Chief Officer and 2nd Officer, preparing to take O.R. and noon position. They saw nothing pass over the ship. There was just the roar. Nothing else.

Well, I had left it at that and forgot all about the matter until three days later, the 28th, I recall.

It was nearly 5:00 p.m., and time for our tea. I sat in my radio room reading some magazines when the 3rd Officer came in and asked if I would like to see a neat formation of jets.

I ran with him to the wheelhouse and then on the bridge.

At first I could see nothing unusual about the planes. Then it struck me: They were not moving.

At the same time one plane climbed steeply, yet the rest did not change their position. They just hung there.

I grabbed my binoculars to have a better look. Sure enough, there, high, very high, were four huge disks. I could hardly believe my own eyes. But they were there all right.

They must have been gigantic. We estimated them to be about 40,000' high, and over 25 miles away from us. But I am not sure.

The sky was clear and, only here and there tiny clouds. The sun was near setting and the horizon red and gold.

In the sun's rays, the objects seemed to give out red vapor trails, but that could have been sun reflection.

The disks were flat and black. They were surrounded by a haze, the same as if heated metal in cold weather will have circulating round it in waves of heat. As I watched the disks something strange happened. One disk completely vanished from my eyes and reappeared in another place.

By that time, the Captain, Chief Officer, 3rd Officer, and I were all very excited. When I finally managed to get the binoculars back, I was just in time to catch final glimpses of the disk.

The copy of the message:

That message was from the previous day, the 27th, said Mr. Fogl.

It was now 1957, when I was this time on the British ship S.S. Ramsay, we were on our way from Vancouver to Port Elizabeth, via Panama.

We had passed San Pedro and the U.S. Navy ships patrolling and having exercises. It was about 2:30 p.m., when I was in my cabin doing my laundry. Suddenly the 2nd Officer called me to see a disk.

Without being told twice, I grabbed my Yashica C reflex camera from my wardrobe and dashed on the side of the bridge. Sure enough, there was a queer looking object hovering in the distance. It was suitable for a shot so I waited. In the meantime, I tried to keep under control my shaking knees and hands, and watched the disk.

It made no noise and was not more than a mile away. It was silver and black. There was no smoke or any gases coming from it. However, under the disk, a red light pulsated.

We thought it tried to signal, so the 2nd Officer grabbed the Aldis and flicked back, but there was no response. At last the disk came down near enough and I got one shot. Then it turned and I shot again.

The disk was rather thick, and had a flat dome. There were no ports. However, there were some black marks, and I wonder if they were not some sort of exhausts. Then we noticed a ladder. Whether it really was a ladder I can't say. It could be some depression in the craft.

The object moved very slowly and stayed with us for a few minutes. Then it shot with quick acceleration towards a rugged mountain, and the desert coast of sun baked California.

I would like also to mention that Vancouver Broadcasting Station announced that some strange objects and lights had been seen by hundreds of people. If I am not mistaken this happened in the first days of December.

Thad Fogl had his film developed in Durban and found that indeed he had captured two very good pictures of the strange aerial object. The majority of the ship's crew members requesting copies for themselves.

On returning to England, he contacted either the Daily Mail or Daily Express newspaper, he can't recall which, who in turn replied that they had no comment to make.

His next step was getting in touch with Brinsley le Poer Trench, who at that time was editor of Britain's Flying Saucer Review Magazine. Much to Thad's surprise, he received a phone call from this gentleman the following day announcing that he had some good news.

It was to be told that Mr. Trench knew that the craft was from Venus, how many crew members it carried, and in what manner its propulsion system worked. This announcement did nothing to impress Mr. Fogl, on the contrary it merely served to anger him to the point that he arranged to meet with this fountain of knowledge.

When face to face, Thad bluntly told Mr. Trench that he was dismayed that he was prepared to disseminate such outrageous lies to a gullible public, that there indeed were serious people who believed in such things as he had witnessed and photographed. Finally adding he thought him pompous, they parted company on less than friendly terms.

By this time, The London Illustrated News and Life magazine had somehow obtained copies of his photographs. Publishing them resulted in a deluge of publicity attention that overwhelmed Thad.

Finally, on receipt of a letter from a young boy in the United States who had enclosed a dollar seeking a copy of the photo saying that was all he had, Mr. Fogl said to himself: Enough.

Without further ado, he contacted Gordon Creighton, present editor of FSR, and admitted to fabricating the picture and story. In essence, anything but truthful, but at least it got the monkey off his back.

By this time, Thad had left his seafaring days behind him and was working for Hawker Siddley, on rocket propulsion systems. For this type of work he had to be vetted by M15, Britain's Intelligence Service, on a very regular basis.

Consequently, admitting to and chatting about flying saucers was not likely to bolster his credibility in anyone's eyes, least of all theirs.

So, from then on, he simply clammed up. At this point, 40 years have passed and Thad felt that he should accept his wife's suggestion and go public again, and set the record straight once and for all.

Therefore, he offered to be interviwed July 2001, at his home in British Columbia. Mr. Fogl readily agreed to be recorded during the interview, which lasted about forty-five minutes.

He was at ease, and readily answered questions, also providing details of his two ocean sightings in a sequential manner.