Man Who Made It Rain Inside 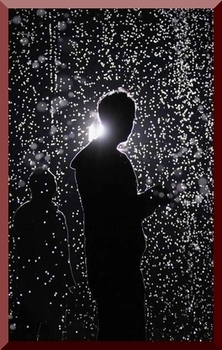 This is the case that put Stroudsburg, Pennsylvania, on the paranormal map.

Longtime Stroudsburg residents may recall the 1983 case of Don Decker, who was, according to reports at the time, possessed by an evil force that gave him the power to make it rain indoors. What makes the case so compelling is that the events were witnessed by at least four police officers and several officers at the Monroe County Correctional Facility.

Witnesses believed Decker was possessed by the devil and even recounted the events for two popular TV shows, "Unsolved Mysteries" in 1993 and more recently "Paranormal Witness," which aired in November on the Syfy Channel.

Decker's grandfather had just died, and he was on compassionate leave from Monroe County Correctional Facility, where he was serving time for receiving stolen property. During his leave, Decker stayed at the Ann Street home rented by family friends Bob and Jeannie Kieffer. (The home has since been demolished.)

Decker said he was in the upstairs bathroom washing up for supper when suddenly he felt strange and confused. He fell to the floor and had a vision of an old man wearing a crown in a window. Decker also had deep scratches that suddenly appeared on his wrist. Kieffer noticed the blood when Decker sat down to eat and asked what happened. Decker told him about his vision and attributed the wound to Satan.

Shortly after, the family heard a loud noise from above and noticed water dripping from the walls and ceiling. Kieffer phoned his landlord, Ron Van Why, and the pair went to investigate.

According to Kieffer's interview on "Paranormal Witness," the two thought it might be leaky pipes, but the only pipes were to the kitchen and bathroom, located on the other side of the house. The men noticed Decker seemed to be in a trance, so Kieffer decided to call police.

According to reports of the event, Officer John Baujan, who now serves as chief of Stroud Area Regional Police, and Officer Richard Wolbert responded.

Not only was it raining indoors, it appeared to be coming up from the floor, "defying gravity," they said.

After the police left, Kieffer and Van Why confronted Decker. During the confrontation, they said pots and pans began clanging in the kitchen and Decker levitated off the floor. He was flung against the wall and more scratches appeared, this time in the shape of a cross near his inner elbow.

Baujan later returned to the house to find Jeannie Kieffer in the living room reading the Bible, trying to "exorcise" Decker.

In his interview with "Paranormal Witness," Baujan said he, too, believed Decker was possessed and decided to call then Chief of Police Gary Roberts to the house, who was not convinced that anything unnatural was going on and ordered his officers to leave and not file a report.

The next day, officers William Davies and John Rundle visited the Kieffer home against Roberts' wishes. Davies said he handed Decker a gold cross, which Decker dropped, claiming it burned his skin. All of a sudden, Decker lifted up off the ground and was thrown across the room with a "force as though a bus had hit him," the men said, and three claw marks appeared on Decker's neck, Bartholomew said in his paper.

One investigator believes science can explain what happened. The weather at the time and the possibility the mysterious rain could have come from an ice dam on the roof of the home where Decker was staying. Ice damming can happen when warm air enters an attic space and melts snow on the roof. When temperatures drop at night, ice can form. Water can become trapped under the ice and eventually leak into the house. Accordingly, ice damming is common after major snowstorms in areas where temperatures rise above freezing during the day and below 32° at night. Weather records show daytime highs in the 40s and 50s and nighttime lows in the 20s and 30s in the days leading up to the events. There was also a major snowstorm in the Poconos 13 days before the indoor "rain."

Before, I wasn't superstitious. I didn't really think much about this kind of thing until it happened. I believe now. I believe this stuff can go on, said Ron Van Why, who still lives in Stroudsburg with his wife Romayne, both of whom are now 65. He remembers getting the call from Bob Kieffer that something was wrong. It was a Friday night, and Kieffer wouldn't tell Van Why what was happening, only that he had to get to the house right away. When Van Why arrived at the house that night in February, he didn't notice anything at first. As I sat there, I got wet, and I thought it was one of the kids with a squirt gun, he said. I looked at Bob and said, What's going on? He said, I have no idea, that's why I called you down here.

The rain was very light, but it was everywhere, coming from the ceiling, walls and up from the floor, Van Why said. Everyone was in shock about what they were seeing, and so that's why they phoned the police. At one point during the investigation, police circled Decker and put a bag over his head to make sure he wasn't spitting, Van Why said. It was then that Van Why saw Decker levitate. It lifted him off the ground and threw him half-way across the room, Van Why said.

Kieffer says it was the weirdest weekend of my life. I knew the rain had nothing to do with the plumbing, and I just wanted someone to come down there and help. Let's put it this way, I was scared shitess.

The family became really frightened when their Labrador retriever, who normally slept upstairs in the bathroom, refused to even go near the stairs. We thought maybe someone else was in the house. We didn't know what, or who, but we just knew we needed someone there to help. The rain lasted from Friday through Sunday night, Kieffer said. It stopped on Sunday after he called family friend and Philadelphia based pastor Justina Hall. When Hall entered the home, she immediately started praying.

After about an hour, the rain stopped and Decker looked like he was at peace, Kieffer said.

The Kieffers lived in the house for about two more years after the experience, but they never were able to remove the stains on the rain splattered walls. Kieffer believes the rain could have had to do with Decker's grandfather.

Donny's grandfather was not a nice person, Kieffer said. I don't know what you want to call it, but I think it was the old man's spirits.

The day after the rain stopped at the Ann Street home, Decker was taken back to Monroe County Correctional Facility.

Back at the jail, reports of Decker's rain followed him. Witnesses say his cellmate was so panicked that he asked to be moved.

Dave Keenhold was working the 3:00 p.m. to 11:00 p.m. shift as a supervisor one night after Decker returned to the jail. Some of the other officers on duty described water seeming to defy gravity as it traveled up the cell walls and flew sideways through the air, Keenhold said, although he did not go into the cell himself.

Keenhold had just been called to a holding cell for new inmates, about 150' from the cell where Decker was located. Officers would have had to go through a set of solid doors to get to Decker's cell.

One of the officers called me over and he looked at me, his eyes got real big, he pointed to my shirt and said, Your shirt! The officer explained to Keenhold that Decker was dared to prove his powers and make it rain on the shift supervisor. At first, Keenhold thought he spilled something on his shirt, but he hadn't been around any water recently. The rain on his shirt had a strange consistency, almost like silicone, he said. The other officer said, Decker did that, and as he spoke the words, both men looked down the hall toward Decker's cell, Keenhold recalled. At that time, we both saw this little ball, about the size of a pencil eraser. It came whipping around the corner and came straight at us, it didn't arc like how when you throw a ball, Keenhold said. The little ball of water struck Keenhold in the chest and kind of splashed off. Keenhold said he called a plumber to investigate the reports of water in Decker's cell.

When the plumber went into the cell, he became so upset he turned around and walked out. He said, Don't call me for this kind of stuff. He didn't really say what he saw, but I knew what he saw, Keenhold said.

The officers in the jail were so shocked by the events they agreed not to discuss it with anyone. They were afraid people would think they were crazy and they would lose their credibility, or worse, their jobs, Keenhold said.

The event convinced Keenhold that Decker was possessed, and he called on the jail's chaplain, William Blackburn, to perform an exorcism. After the ritual, the events never happened again.

This story was covered up for about 10 years until "Unsolved Mysteries" came to town to film. Keenhold decided to come forward after seeing how many credible witnesses there were in the case. As for those scientific explanations, Keenhold calls them "hogwash." I do not believe any of that for one iota, he said.

People have questioned Keenhold's experience. People asked why didn't we have the water analyzed when it hit any of us. We all said the same thing, including the police: It evaporated within a moment or so, Keenhold said.

The experience solidified Keenhold's faith in God. We were just sick to our stomachs over this whole thing, Keenhold said. One of the officers actually told me, We were looking into the eyes of the devil. We didn't realize who we were messing with.