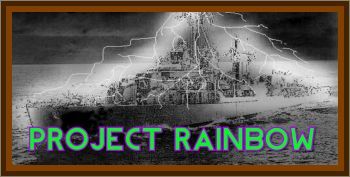 Project Rainbow was a military project developed during the early 1940s as an attempt to make a ship invisible to enemy radar. It can be considered a fore runner to today's experiments with stealth technology and radar invisible airplanes. To achieve this result, various experiments with electromagnetic fields were carried out. The project culminated with the infamous Philadelphia Experiment. Following that disaster, Project Rainbow was halted, and Dr. John von Neumann, the project's director, was sent to work on the Manhattan Project.

Project Rainbow reappeared in the late 1940's. The project now concentrated on the technology behind the electromagnetic bottle created during the Philadelphia Experiment and how it could be further developed. At the same time, Project Rainbow's former director, Dr. Neumann started research into how and why the human crew of the Eldridge had been so horribly affected by the fields created. Finally, in the early 1950's, the two projects were merged, becoming the Phoenix Project".