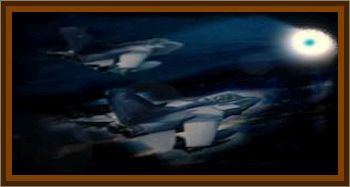 Location: Airspace Over the United Kingdom

A number of strange sightings were recorded throughout Northern Europe. Around this time there were also many UFO sightings in Belgium. In France, about 15 miles east of Paris, martial arts instructor and former Air Force/Air France pilot, Jean Gabriel Gresle was standing outside a local gym at 7:00 p.m. local time. He saw an “…enormous device..like a floating city…about 1000' long with a thickness of 200'…triangular substructures and many, many lights. It projected two huge divergent beams of light that didn’t quite reach the ground”. Gresle noted the lights dimmed very quickly as it turned its back on his group and noted a zone of silence as it flew over at “never more than 100 mph”.

The same evening a flight of RAF Tornados were flying back to the UK from RAF Laarbruch, Germany. At around 6:00 p.m. a large object on their right was detected sporting an array of blue and white lights and overtook the group. After a short moment the craft accelerated out of sight at unimaginable speed. Nothing showed up on the radar of the control tower or the aircraft. Another RAF crew reportedly saw the craft and had given “possible identifications” as Stealth aircraft. But the blue and white lights make that seem highly unlikely.

A British Airways passenger jet was returning to London at 31,000' over the Alps and the pilot also reported a strange sighting. At around 6:15 p.m. the pilot reported seeing ahead and to his right a set of bright lights with the leading light somewhat larger and brighter than the others described as “a large silver shaped disk “. They were flying in a V formation but disappeared out of sight rapidly. He heard another crew report in a similar sighting.

Later reports claimed this was a satellite, whilst the pilot responded that he had seen satellite re-entries before and it didn’t look like a satellite to him. A colleague in another BA aircraft later told him he had seen two bright mystifying lights over the North Sea on the same evening.

Around 10:00 p.m., two more RAF Tornado crews sighted two large UFOs with blue and white lights around the rim over the North Sea. As they closed in on their targets one of the fighters was forced into evasive action to avoid colliding with a UFO as both targets headed north and out of range. Again radar picked up nothing. The mystery of what the pilots had seen remained.

In a case related to this, on this same date and same area...

In a report that might sound like something straight out of an episode of The X-Files, it is one supported by the Civil Aviation Authority's of New Zealand own records.

I've never seen anything like it before and can't explain what it was, said British Airways pilot Mike Dalton, of his sighting of a large, silver disk shaped object from his Boeing 737 from Rome to Gatwick on the night of November 5, 1990. My copilot and I called in two cabin crew to see it and then it went out of sight.

Ground radar couldn't pick it up, so it must have been traveling at phenomenal speed. Subsequent investigations determined the UFO had been seen by a second BA pilot and the pilot who was obliged to take violent evasive action to avoid a collision with it.