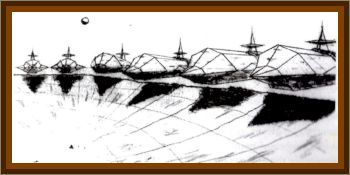 My father was in the U.S. Navy in 1956, stationed at Quonset Point, RI, and travelled back to NY on weekends with 2 other Navy colleagues.

The road taken over multiple weekends and over 18 months time had no lights for miles and there was nothing but forest and trees for miles. They travelled the same route for 18 months every weekend and there were never any street or traffic lights.

One night, at about 1:00 a.m., they were driving down the dark barren road and noticed a row of saucer shaped lights hovering over the tree line just off the road. The row of lights stretched down the road as far as they could see. They drove further and then saw a huge and very wide beam of light coming straight out of the trees. On the other side of the beam there was another row of saucer shaped lights.

When they stopped at the beam of light and got out of their car, there was compete silence. The 2 rows of lights on either side of the beam touched the beam in tandem and then rose straight up and disappeared. Then the next 2 lights did the same thing and then again and again.

They witnessed this for about 20 minutes and then left to report it to the base commander who told them they saw Northern Lights. They stand by what they saw and it was not Northern Lights.