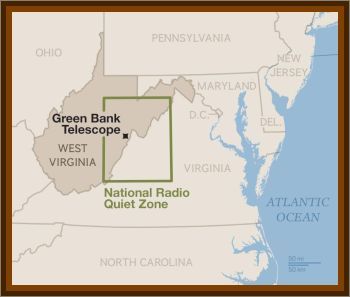 Location: West Virginia, Virginia, and a small part of Maryland.

The National Radio Quiet Zone (NRQZ) is a large area of land in the United States in which radio transmissions are strongly restricted by law, to facilitate scientific research and military intelligence.

The barrage of noise and distractions that are all but inescapable in most American communities is refreshingly absent in this unassuming hamlet, located in the wooded hills of Pocahontas County, 4 hours west of Washington, D.C. Here, no cell phones chirp or jingle, and local kids aren't glued to the glowing screens of their mobile devices. Older residents roll down their car windows to greet each other and leave their front doors unlocked.

But Green Bank, population 143, isn't a technological backwater. On the contrary, it is the proud home of one of the marvels of the space age: the Robert C. Byrd Green Bank Telescope, or GBT for short. Towering nearly 500' above its wide, green valley, with a dish large enough to cradle a football field, the GBT is the world's biggest fully steerable radio telescope, and one of the largest movable objects anywhere on land. Locals jokingly refer to it as the Great Big Thing.

The GBT and other radio telescopes enable astronomers to detect and study objects in space that give off little visible light but emit naturally occurring radio waves objects such as pulsars, gas clouds, and distant galaxies.

Because of its vast size and sophisticated design, the GBT is exquisitely sensitive to even the faintest radio pulses coming from space. For the same reason, it is also extremely susceptible to electronic interference. Any device that generates electromagnetic radiation: a cell phone, a television, a wireless Internet router, can skew its data. And so the people who live in these parts must, by law, forego some of the gadgets that most of us take for granted.

Those restrictions began in the 1950s, when the Federal Communications Commission created the National Radio Quiet Zone, a 13,000 square mile swath of sparsely populated countryside that straddles the borders of West Virginia, Virginia, and Maryland. Use of the airwaves inside the zone is strictly regulated to ensure that the high tech telescopes at Green Bank and nearby Sugar Grove can operate with minimal disturbance.

Astronomers first tilted the GBT's giant ear toward the stars in 2000, and the cosmic whispers they've been hearing ever since have yielded insights into the nature of the universe.

Recently, the GBT contributed to a staggering discovery:

Our Milky Way galaxy is situated in a supercluster of galaxies 500 million light years in diameter, with a mass of 100 million billion suns.

Another project currently under way uses the GBT to search the skies for primordial gas that formed as the universe cooled. Site director says maps of the gas, used in conjunction with computer models, can help determine where theories of the creation and evolution of the universe are correct and where they may need revision.

The GBT also recently detected a hydrogen cloud hurtling toward the Milky Way at 150 miles a second, predicted to crash into our galaxy in about 30 million years.