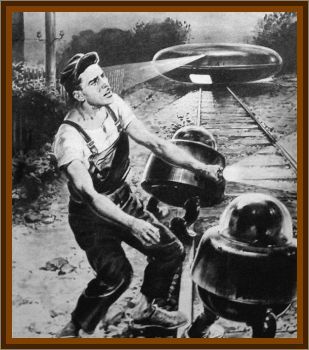 Marius Dewilde lived with his wife and his dog, Kiki, in a small rural house by the railway tracks. According to Dewilde, on the night of September 10, 1954, he was reading a newspaper while his wife was watching television when they heard Kiki barking incessantly. Initially, the man dismissed the pet’s alert and went back to his paper. But the dog kept barking and Dewilde became concerned.

What’s going on? he asked his wife, realizing she wouldn’t be able to produce an immediate satisfactory response about what was causing the ruckus. Equipped with just a battery operated flashlight and leaving his spouse behind in the room with the TV still on, he ventured into the night to investigate. It was very dark, so he had to use the flashlight to find his dog. The animal was terrified.

I told him to shut up and stop barking, but then he started growling, Dewilde told the astonished officials. I then went towards the right side of the house, which is surrounded by a 4' fence I made it in order to prevent kids and my dog to come across the railroad. As I walked to the fence, I saw a large thing that caught my attention, about 20' away. At first I figured it was just a wagon or something, but then I realized it wasn’t possible for a train to just stop there at that particular spot. It was then that Dewilde heard the same noises the dog had been alerting him about earlier. Only, this time the noise was close, right behind him.

I thought they were some thugs, as this is the route you usually take in order to get to Belgium. My dog went crazy and began barking and growling again. Then, the shadows began to approach him. The shapes he saw were so small, he reported, that he thought they were children. So I pointed my flashlight at them and I jumped back when I saw the beam of light being reflected back at me when I pointed it right at the head of that thing. It was like a helmet and a mirror, they were very small.

At that moment, a beam of light allegedly came out of the wagon like object he had seen earlier, which left him completely paralyzed. His entire body, he recollected, felt numb, so he wasn’t able to run away or even scream, although he said his mind was clear and could see everything that was happening.

I’m there seeing these things walking from one place to another over the sidewalk. As they approach me, I notice that they don’t have arms. The creatures are short, probably 3' and 30" tall. Their feet are big, very big, and their heads were covered with helmets that looked as if they were part of their attire, like joined in just one piece. So they keep coming towards me and I start feeling dizzy. Then I hear the sound of a door being opened. I somehow am able to turn my head slightly to the right and take a look at the wagon, and I noticed there is indeed a opened door on it.

Immediately, the things entered the wagon and it began hovering about 40' up. Seconds later, the object turned bright orange, almost red, before disappearing into the dark skies.

Dewilde was now recovered and able to move again.

When he went back inside the house to tell his wife, she explained she hadn’t seen or heard anything. He then went to his neighbors but he obtained the same response. Surprisingly, he was the only witness to the incredible event that had just taken place just a feet away. Startled and concerned, he decided to call the local police, but when they arrived, he began feeling sick every time they approached the exact spot where the incident occurred.

The official investigation went on and strange things started to happen. Trains began making abnormal noises, phones stopped working, and electronic devices, such as the flashlight Dewilde had been previously carrying, were no longer functional. A 20' depression was found on the exact point where the object had landed, with a few carbonized rocks laying on it.

In 1991, a woman at a UFO conference in France claimed to have seen the same orange light flying on the night of the incident from a house near Dewilde’s.