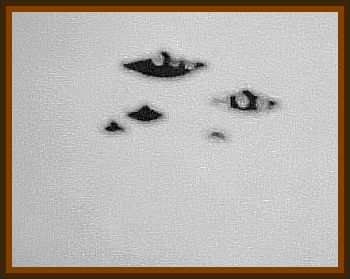 Having just seen a shell shaped object taking off from his farm, the witness proceeded to chase in his car a ball of light, which stayed 150 yards ahead of him.

Then his engine died and his lights went out, and he noticed a saucer shaped object descending, it was slightly bigger than a Peugeot car, 9' to 12' above the ground and about 60' away. On top of this object were 2 transparent cupolas, in each of which he could see a helmeted figure, human like and dressed in green and white coveralls.

He felt a wave of heat and a transient sensation of paralysis. With a whistling sound, the UFO rose to a 150' altitude, dropped back again to near ground level, then, becoming brilliantly yellow/white luminous, took off at tremendous speed.

As it did so, his lights came back on and he was able to start the car normally. Several days later the witness experienced trouble in sleeping, followed by some weeks of excessive sleepiness.

The area had been the site of repeated UFO incidents for a year.