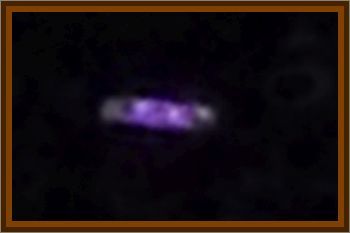 I walked out the frontdoor of my home to my car to go to work at approximately 8:00 a.m. I was facing east. The weather was sunny but with just a few light,scattered clouds.

The clouds were no hindrance to visibility.

As I proceeded to my car, I looked up to the north northeast sky and observed a large, purple object, one only, that sent cold chills down my spine.

It appeared to be moving very slowly over the southeastern corner of Lake Hefner, in a southerly direction and then turning to the southeast. The speed was similar to the speed of a blimp. The altitude was less than 1000' It appeared to be at a distance of approximately no more than 1 to 2 miles away. It was completely silent.

I was in a state of disbelief or denial about what it might be.

I was trying in my mind to tell myself it was something manmade.

I also knew for certain that it was not an airplane, as I am familiar with the physics of airplane flight due to the type of work I do and who I work for.

It would have stalled out as big and slow as it was moving.

Next I tried to tell myself it was a blimp, but I am familiar with say the Goodyear blimp, and it was not that due to the coloring. It had bluish looking panels going around the craft in the middle laterally. They appeared to be flashing to a degree.

I wondered if it might be some sort of advertising device on a blimp. I told myself it was very odd looking but beautiful for a blimp. It was very strange because that was the only lights on it. No beacon lights, red, white, or green, were observed that a normal craft would have.

As I was observing it`s motion,I yelled for my wife to come outside,which she did. I pointed it out to her and she also saw it, along with my granddaughter, who also observed it.

I said: keep an eye on it and I will run back in the house to get a camera. I did this but could not find the camera. This took no more than 30 seconds.

I ran back outside and it had disappeared. I asked: Where did it go? My wife said it accelerated so fast it appeared to just disappear.

We asked ourselves what could it have been? The complete time of the event was no more than 2 minutes. First, it was definitely not a plane. The Harrier jet is the only plane I know of that could move like that, and it was not in the shape of a plane. Secondly,if it was a blimp, how could it just disappear like that? I have watched blimps land or accelerate and it takes a little more time to accomplish than the 30 seconds I was in the house.

I listened to the radio and checked the newspapers and never heard anyone else report this event. I am at a loss to know what we observed.

My background is: Machinist for the U.S.A.F. for 28 years and 53 years old. My wife is a clerk for the Oklahoma XXXXXXXXXX, and 2 years younger than me. My granddaighter is 8 years old. I dont use any type of alcohol or drugs, nor anyone else in my family. I can report that we all were very sober for this occurrence. I regret not having the date of this event nor any photos of the craft. Also I wished I could have reported the event sooner.

I hope that by telling of this occurrence to someone who knows something of UFO`s that it will help me to purge my mind of the frequent question I ask myself: What did we see?

And I hope that maybe someone may have seen something similar to this somewhere. If you are able to help, I would be very grateful.