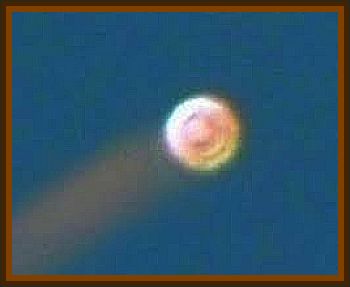 This happened when I was in Gr.2 in my home country. Believing what I have seen is up to you.

The moon shaped orange color, planetary like, object appeared in the East sky as me and my family members were sitting in front of the house.

We didn’t really notice it since it was close to a full moon time but my father noticed it due to the fact full moon doesn’t appear in the east side but along South and also the sky was crystal clear but the moon shaped object which rather seemed to be a full spherical and appeared little bigger than the moon.

After my father told me, me and my family including one of my uncles looked at it amazingly for 20 or 30 minutes when in the upper South East corner of the Sky a star shaped object appeared, it was weird seeing a star in the day sky, then it popped up into an oval shape and released a moon shape object similar to the first one but this time in a different color, this one was red.

Then consequently 2 or 3 more of these objects cracked open from the star like shape and appeared on the day sky in different colors, although we had seen how the objects came we weren’t sure about how the first one originated in the East sky.

After all of these appeared on the sky, they stayed for a long time like 3 to4 hours. Then they shaded into long straight lines vertically on the sky and disappeared.

The next day I went to the school and since the objects were luminous and appeared in the day, I thought alot of people might have saw them. Unfortunately to my disappointment no one saw it except me and my family and my uncle.

So I didn’t care about it since we were running for our life during the war, but I wondered about it sometime after I came to Canada and my uncle died and my family has no memories of such things.