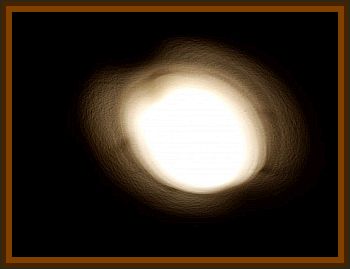 I was on military leave for a week end during my basic training in the South African army. I was walking with a friend at around 9:00 p.m. on a Friday night.

We had been to a discotheque which was closed for some reason, and we were walking back to my friend's house in Emmarentia, which is a suburb in northern Johannesburg. We were both around 18 years old and sober. My friend's house, parents house, was situated near a large lake, Lake Emmarentia.

As we approached the lake we were both astounded to observe a glowing orange orb, the size and color of a harvest moon, pulsing and hovering over this lake. It appeared to be pulsing and quite stationary. It began moving fairly quickly across the lake, stop, go straight up, stop there suddenly, move horizontally, hover for a few seconds and continue these erratic up and down maneuvers for a few minutes, then in a lazy upward angle, and in an Easterly direction it sped off, gathering speed very quickly, and as it did so the color of the orangy yellow orb paled until it disappeared and the last sight before it disappeared was that it was almost a see through transparent white color. The faster it went, the paler it became, as I said, and then disappeared from view.

Nothing had been spoken during this sighting apart from right at the beginning of the sighting when we first saw the yellow orb, and to which we both said basically:

Wow, what is that?

After it had disappeared, as suddenly it, or another very similar orb reappeared and basically went through the same maneuvers, though the time was quite significantly less than the first one's maneuvers. It too sped off in a slight upward and Easterly angle and it too disappeared paling as it sped up until suddenly it was invisible.

We exclaimed to each other that that definitely was a UFO, and we rushed back home, just a few minutes later and called the Rand Daily Mail, which was the cities morning news paper, and reported the sighting.