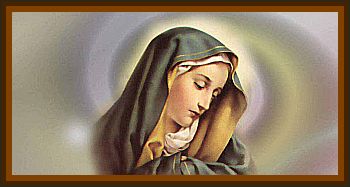 Magorzata Baszkowska, a poor woman saw a wondrous female entity who introduced herself as St. Ann and as proof she gave her 4 wreathes.

3 of them were joined together and interpreted as the symbol of the Holy Trinity. The other wreath had the symbol of St. Ann. A church was built at Prostynia as the woman ordered. The wreaths were then placed on a silver crown and are still used to bless pilgrims.

Around the same time an extraordinary looking woman asked a local peasant from Zlotki for a lift to Prostynia. The peasant did not know the woman but agreed to take her. But immediately the oxen turned into the marshes and the peasant became frightened. However the woman assured him that they would be safe. Soon they stopped at Prostynia Hill and the woman said:

I am St. Ann. I’ve have come here to worship the Holy Trinity.

The peasant stood on the hill praying the whole time.