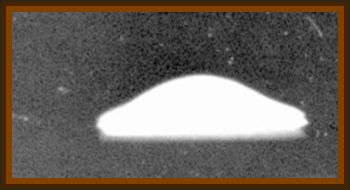 The 52 year old witness was watching jackrabbits by moonlight in the Veterans Administration Hospital grounds when she heard a whirring noise and looked up to see a luminous white ellipsoidal object coming down for a landing, approximately 30' to 40' away.

Its contours were fuzzy, the top of the object was a soft luminous pink and something like a horizontal periscope, or boom, protruded form the right end. The object was about 40' to 50' in diameter and about 20' high. The whirring ceased as it landed, and she saw no landing gear.

The sight transfixed the witness. Then a human like figure well over 6' tall, with very broad shoulders, appeared walking toward her from the UFO. She had not seen him emerge through any door. He wore a silvery one piece outfit that was tight, like a frogman’s outfit, and he appeared to have on mitten like gloves. Coming up to her he spoke, saying:

I am Onleel, I want to talk with you, come with me.

She saw only his eyes, large and dark and with what seemed to be tiny points of fire deep within, she saw no other facial features, and the voice, probably telepathic, seemed to come from the eyes, the witness felt compelled to obey.

The next thing that she remembers is that she is inside the ship, with no recollection of how she got onboard. She follows Onleel across what appears to be the main central room through a doorway to a smaller room. In the room are 3, possibly 4 other beings, in general description similar to Onleel but smaller, between 4' and 5' tall, and wearing one piece suits of a brown color, with boots. 2 are seated at what appears to be a control panel, while the third stands before something like a screen. They pay her no attention. She has the impression that they may be females, although there is nothing specific abut their shape to suggest this, only their smaller size. The fittings and furniture were all of spun aluminum and a bright light that illuminated the interior had no visible source.

In a room to the other side of the control room she partially observed what might have been bunks. In the smaller adjacent room, Onleel sat the witness down, and offered her an aluminum cup with liquid resembling milk, she declined the offer to drink. Then Onleel, who stood before her on what appeared to be a kind of plate in the floor, asked her a number of questions, some of which were of a highly personal nature, indicating that he must already know a great deal about her. He asked her what she would do in various hypothetical situations, and he discussed with her aspects of reincarnation.

When asked how she would react to the prospect of facing death, she responded by saying she would accept it. He told her that she was one of the developing ones, there are many of you scattered all over the planet, and he said he, or they, would be coming back for her.

The witness asked when and why.

It is not for you to know.

His voice was a metallic monotone, somewhat similar to the voice of a computer.

After the quiz, which lasted perhaps 20 to 30 minutes, she again found herself outside the object, dazed and upset, with no recollection of how she got there. She was on the street now, outside the VA Hospital grounds, near her own apartment.

She got home at about 2:30 a.m. There were many things about the experience she is unable to remember. She had been wearing a new pair of shoes, in the morning, she noticed that they were covered with desert dust and burrs, this confirmed for her the reality of the experience, that it had not been a dream.