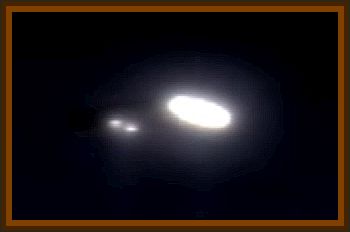 At 4:00 a.m. a glowing disk was videoed by on duty Sgt. Nico Stander of the Adriaan Vlok police station, Pretoria, and Pretoria resident Johann Becker noticed it hovering over Erasmuskloof.

The pulsating disk contained a red triangle, and at one point emitted bright green tentacles.

A chase ensued involving some 200 policemen and a Bo-105 police chopper, piloted by Supt. Fred Viljoen.

The chopper with 5 officers took to the air at 5:30 a.m. and spotted the object over Mamelodi.

Viljoen was in contact with radar operators at AFB Waterkloof, who reported radar clutter in its vicinity.

While pursued by the chopper, it performed vertical and horizontal undulating movements, while outpacing the chopper at maximum speed some 170 mph.

The chase was given up at 10,000' in the Cullinan area, when their fuel ran low and the object made a vertical ascent.

An object was sighted in the area again during the early hours of August 31 and September 1.[