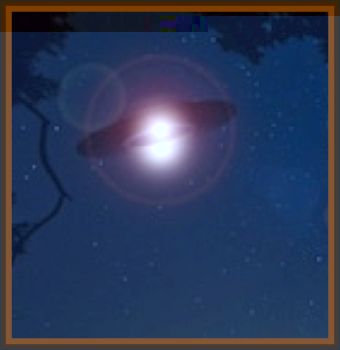 I was home on Christmas break. This was the night of the solstice where the moon was full and also at its closest point to the Earth. my friend and I decided to hike Thumb Butte at night since it would be the brightest night in 122 years or so.

On our way back down the trail I was looking down because we had to step over a ditch in the trail, while I was watching my step a bright red flash lit up the forest around us for miles. I quickly jerked my head up and got a reference, I could see the flash light the forest for at least 7 to 8 miles ahead of us for about 1 second.

My friend saw the same thing. When we looked up, the only place the flash could have come from, the only thing we saw was the moon and a small Cessna flying around, probably from the Prescott airport.

There is no way the Cessna could have had something powerful enough to light up a 15 mile diameter area like that. I thought that’s bizarre, where the heck did that come from? And we got in my truck and drove to the Skull Valley lookout, about 4 or 5 miles south of Thumb Butte.

This event had reminded my friend of something that he and another buddy had seen on consecutive Friday nights a few months earlier. We waited about 10 minutes until we saw a single white light fading in and then out, for a period of 10 seconds or so. We couldn’t get a reference on how far away, but at least 10 miles or so. The light would fade out and then appear laterally from the first position and do the fade in/out thing there. Then, 2 lights appeared, stayed lit up and kind of throbbing but not fading out completely as before. After a few seconds both lights moved towards each other, appeared to merge into one and then go straight up and fade out for good.

My friend said that he had observed 3 lights all dancing around and then forming into one and zooming off. He reported one of the previous events to a UFO place online, I don’t know which one, and a Professor from AZ State came up from Phoenix, interviewed him and told him that things like this had been reported lately in the Prescott area.

We got our hands on some good Bureau of Land Management maps, a friend of ours worked there, and there is nothing along the bearing line from the Skull Valley overlook to the place we saw the lights for a good 70 miles or so. no towns, no radio towers, except several Abandoned” U.S. Army mines.

The BLM friend said that he had been near those mines before and that there were brand new signs on the barbed wire fence saying:

U.S. Army property, no trespassing. Trespassers will be shot on sight.

No rust, no dings, no fading, had to have been placed there within the last few months. He also saw camouflaged men on dirt bikes with rifles shouldered. Now I am not one to give credit to most UFO stories but that night I definitely saw an Unidentified Flying Object(s) and have ruled out:

Stationary blinking towers, the lights moved over a good distance.

Helicopters/planes, the light would be steady and fade in and out very much slower than the strobe/blinkers on aircraft

Anybody else know anything? I am a military officer and deal with aircraft/boats on a regular basis, and know their lighting patterns and characteristics for what it’s worth.