Abduction In Germany Of Pregnant Woman 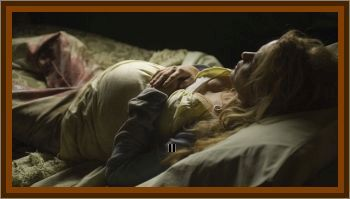 That night an abduction by UFO occupants occurred. A metallic, egg shaped UFO with a flashing red light hovered over a car with a German couple and a 19 year old American woman named Owens.

The car's occupants experienced over 90 minutes of missing time. The principal abductee, the wife of an American soldier stationed in Germany, was levitated aboard the UFO. She was five months pregnant at the time. She had no memory of the abduction prior to hypnosis. During hypnosis she recalled that the aliens had huge, baldheads, and deep set eyes. They had a greenish colored skin, with a roughness like mummy wrapping. Their hands had four fingers, and were twice the length of human fingers.

Dark triangular objects with pale yellow lights were seen over over Heathrow Airport and in Ducklington, England that day and evening.