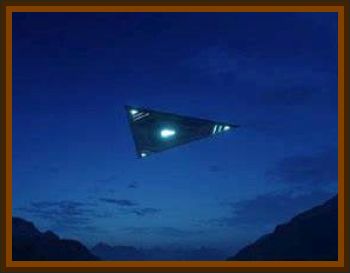 I wanted to relate one more incident where I was much closer to the object and in a better viewing position.

This was 2 or 3 years ago. I notified a national UFO group, it may have been MUFON, by phone right after I got home.

And this was the closest I’ve ever come to seeing an airborne craft that defied the norm. I was only 5 blocks from my home and stopped at a traffic light. As I was an amateur astronomer when I was an adolescent, it is my habit at night to look up at the sky, I suppose to make sure everything is still in order.

Looking up straight through my windshield, I saw what appeared to be a triangular object, delineated by lights at its corners. It was flying at an extremely low altitude, certainly not too far from being directly overhead. It’s hard to imagine a plane having permission to fly that low.

While waiting for the light to change, I quickly got my bearings on the object, thinking it must be coming toward me, but it wasn’t. It was standing in one place, hovering, if you will. What kind of triangular aircraft can do that? What a time to not own a video camera! Of course, the light changed, and as I was next to my old high school, I headed for its parking lot.

It sits at the highest elevation from there all the way to the Missouri River in Kansas City. Just for reference, my high school is called Shawnee Mission East in Prairie Village, KS, which is a suburb of Kansas City, MO.

I was certainly hoping the object would still be hovering, but by the time I got out of the car in the parking lot, it was flying away very, very slowly to the northwest, toward what would be Kansas City, KS and still at low altitude.

As I recall, I could make out an engine type of sound as it flew away, though it didn’t make much noise at all at that point, and I heard nothing when it was hovering above me.

Like the sighting I described to you a couple of days ago, the feeling I had in viewing these crafts was one of command, theirs, not mine.

After seeing the object I’m describing in this report as it flew away after having stood motionless above me, I felt it owned the sky, like a bird of prey at the top of the pecking order. It was as if it was on a sightseeing tour, surveying all that was below.

What does someone possess that can hover like that and then slowly fly away? This was my first experience with something like this, and if I wasn’t a believer in unidentified flying objects before, which I was, I certainly was then!