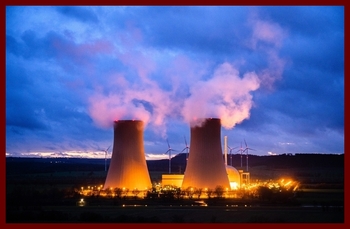 It was 10:00 p.m. on the hot still night, when at least a dozen residents at McLeese Lake on the Cariboo Highway, British Columbia, saw a glowing blood red object about the size of a soccer ball move into sight from the south. It was traveling directly above newly installed cables leading to the giant Peace River power project to be far to the north.

It didn't seem to be in any hurry and it stayed right over those lines as if it was studying them, said Mrs. Alfred Beck.

A noteworthy point of this incident was that the Peace River project had not then started operation, so no power was passing through the cables at the time. Therefore the object's interest, for reasons unknown, must have been focused on the mere existence of the system.

Since then the Peace River project has gone into operation, causing much ecological damage in its northern area of origin but becoming a major source of power supply for the rest of the province. At the southern extremity the terminal station at Duncan, for servicing Vancouver Island, contains some of the newest and most advanced equipment on the whole system. A high point overlooking the station is Mount Prevost on the outskirts of Duncan which is topped by a red air navigation light.

It was about 7:20 p.m. and I had just started out in my car to attend a hockey game when something caught my eye above Mount Prevost and I thought, that's funny, there are two red lights up there.

My first thought was that the other light must be a helicopter but it didn't seem quite right so I shut off the motor, got out and listened. There wasn't a sound. It was a very quiet night and I am sure at that distance I could have heard a helicopter.

Aranela guessed the light was less than two miles away and about 2,000' up, far too close to the mountain for safety in a normal night flying aircraft. The light was about five times as big as the standard light up there and was moving slowly from north to south, which coincidentally, perhaps, is the general direction of the power lines.

Then Aranela noticed something that convinced him the object was strange, though he would not suggest it was a flying saucer.

There was a structure on the top that looked like a ladder with three or four cross pieces, he said. It was attached at an angle to the object and it was revolving slowly around a fixed base. I could see it quite clearly in the red light.

He watched the unblinking object for about five minutes before it disappeared from view.

The incident reminded us of a news item carried in the Peace River Block News, it says in part:

The sighting of a red light in the sky over the Kilkerran district has been confirmed by two other residents of that area close to Bennett Dam.

The original report was by a man and his wife located at Mile 5 on the Alaska Highway, Mr. & Mrs. A.A. German. They sighted the light behaving erratically over Kilkerran way and they lost sight of it when the light went behind a hill.

Mr. & Mrs. Clifford Massee and their 15 year old son Blaine live in the Kilkerran area and they looked towards the south and spotted the red light and watched for at least 30 minutes before it traveled south and out of their sight.

Mrs. Massee reported that the light hovered, moved from side to side and then after about half an hour appeared to head south when they lost sight of it. There was no noise from it that they could hear. It wasn't blinking and it wasn't the light on the top of the microwave tower as that is a few miles to the east of their home. The Massee family discounted that the red light could have been an aircraft or a star, and it was high enough off the horizon that there was no mistaking it.

The Massee home is located near the Kilkerran Hall which is to the north and slightly east of the family who first reported the UFO.

At the same time, 9:50 p.m., Mr. K.B. Miller of Kilkerran came outside and watched what appeared to be a bright orange light in the field of his neighbor, Mr. Harwood. The field is located half way between the Miller home and the Harwood home, and both are located eight miles north of the Dawson Creek traffic circle.

Not thinking the light was anything more than a snowmobile, Mr. Miller donned skis next morning to see what he could notice of the place where the light hovered. All he could find was an area where the snow was unusually rippled and slightly melted as if, from heat. He states there was about 1½' of snow in the field and that the landing site was clearly marked. There were no other tracks of any kind in the area.

The basic pattern emerging from this 6 year chain of events, covering the life span of the Peace River power project, is strikingly clear, unexplained lights, perhaps best described as soccer ball sized, mostly red and slow moving, are conducting what appears to be a close up study of the system along its entire length of 700 miles.

If study seems to imply an intelligence that may not be there, let's note again the revolving ladder type structure described by witness Aranela in Duncan and compare it to the observation of the reporter on the Peace River Block News who wrote to researcher McKay In Ontario. He said that in addition to the sightings in the Kilkerran district, UFOs had been observed directly over the dam at Hudson Hope where the power project originates. There were two incidents involving groups of three lights that passed over the dam site and lit up the area at night with a white light.

Then there was a 3rd sighting close enough that the two guards on duty could see a protruding aerial turning slowly as the object hovered.