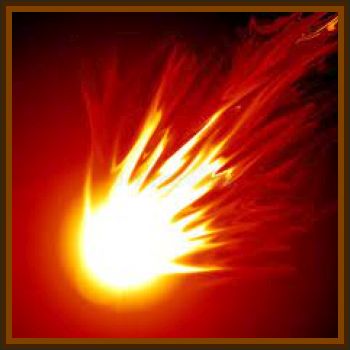 My 2 young sons ages 7 and 9 were sleeping outside in the front yard. We lived in the country in Powell, WY, Park County.

We had watched the fireworks from our country home and were in our sleeping bags by 12:30 a.m. The 7 year old fell asleep but the 9 year old was still awake.

Just then we saw a very large orange/red fireball coming from the South almost directly over our house. It seemed rather high but was quite large, I tried to compare it to the size of the moon, yet don't know how high it actually was.

It was way above the tall trees that grew close to our home. It was completely silent.

If we hadn't seen it with our eyes, we wouldn't have known it was there. Just as it glided over I watched it as it went to the north towards Billings, MT, about 90 miles North.

As I turned to watch it go, I saw another one coming in almost the same trajectory. It looked the same size, no noise and was headed up North like the last one. And as I started to watch it, here came another one from the same direction.

All in all, it was about a minute for them to all come, one at a time, and go North. I quickly ran in the house, recorded the sighting on a piece of paper and drew the trajectory of the 3 fire balls on a paper.

I worked for the State of Wyoming as a departmental secretary. On getting to work I told fellow workers about what I'd seen and they said that people who saw something last night were to call the Sheriff's office.

I did call and gave them the information as I am giving you now. I have never been contacted about this and I'm almost 81 years old now. I will never forget what I saw and cannot ever deny seeing it. I know there are UFOs.

I wonder if anyone in that area has ever reported this sighting. Thanks for your giving me the opportunity to report this after all these years.