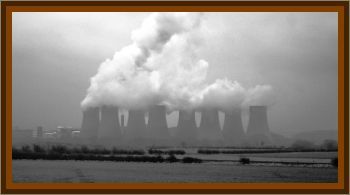 A famous incident that occurred in 1945 took place near a nuclear power plant which was being operated secretly at Hanover, WA, toward the end of the WWII. A pilot, Ensign Roland D. Powell had been stationed at a U.S. Naval Air Station at nearby Pasco, WA, and was one of six Grumman F6F Hellcat pilots, who had been scrambled after radar detected an object moving toward the nuclear plant.

The craft had been observed by Powell & his company hovering over the facility at an altitude of approximately 65,000', a feat which known aircraft at the time could not have managed.

The object Powell and the others observed appeared to be large, oval shaped, metallic, and giving off a pinkish hue, and was approximately 3000' across, remained in the sky for close to 20 minutes as the pilots attempted to fly high enough to observe it more closely, and eventually the object, whatever it had been, vanished by ascending straight upward at a high rate of speed.

A historian, writing about the incident in the January 2012 edition of OpenMinds Magazine, recounted another peculiar element to the object, the fact that it may have employed a crude sort of cloaking mechanism. Powell and the other pilots reported seeing vapors of some kind being emitted from the edges of the craft, which had seemed to be used for purposes of concealment.

This observation alone seems odd, if Powell and the others had indeed correctly determined the purpose of the vapors seen emanating from the sides of the object. After all, this would seem to be a rather clumsy mechanism for concealment of a craft which otherwise appeared to be capable of highly advanced maneuverability, exceeding even what known aircraft today can achieve. Perhaps the vapors were actually exhaust, or could be explained by some other alternative function of the craft, though little can be derived merely from the descriptions given by Powell and his fellow pilots. Remaining remarkably similar to UFO reports that would continue for decades to come, the Hanford UFO of 1945, while one of the earliest encounters of its kind.

At its simplest, the UFO enigma seems to represent a form of technological phenomena, observed most often in the skies above us, which exceeds the capabilities of technologies that are known to exist today. This sort of information would indeed be tantalizing for someone today, since the apparent technologies in use that are of known earthly origin are already capable of fascinating things. We have achieved spaceflight, and have probed the depths of the ocean as well as the frontiers of beyond our own atmosphere. Anything that exceeds our best and most formidable technologies would have to employ an impressive amount of technological mastery, and behind it, an intelligence that challenge our very limits of thought and imagination.