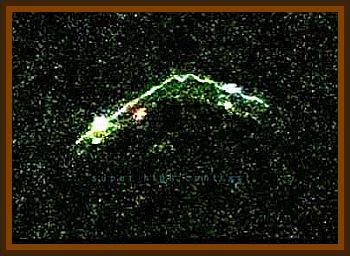 The Black Boomerang UFOs appear to have been a particular feature over the skies of New York throughout the 1980s. These boomerang sightings stretch back to the late 1960s in the New York and New Jersey area, and while not as often, they still occur in the area today.

Why, though, was this particular UFO witnessed so often over this region in the eighties? It is an answer we are not likely to find out, but the accounts from the time are extremely interesting reading. And, one day, as researchers piece the UFO puzzle together, may prove to be an important piece of the overall picture.

On the evening of August 25, 1985, shortly after 9:35 p.m. a journalist for the Poughkeepsie Journal, received an excited phone call from one of their photographers, who has always wished to remain anonymous. On the other end of the line, she offered that:

One of those giant boomerang UFOs that people had been reporting for years was heading in their direction. It was currently heading along NY Route 9. If he was to go the windows, or even the roof of the office, the photographer suggested, he would likely see it himself.

She would explain in 2015 when the case was reexamined by the journalist, that she had been out at the Dutchess County Fair that summer's Sunday in New York. Around 20,000 people had attended, most of which were now heading along the same road as the UFO. The photographer had been on a hill overlooking the fair, hoping to capture several more shots of the hustle and bustle of the summer outing. As she was doing this and speaking to someone nearby, she suddenly noticed a strange sight. Something that definitely was not an airplane.

The object was rounded slightly and most definitely a darker shade against the early evening sky. And furthermore, it was huge. She and her friend continued to watch for around ten minutes when it suddenly vanished in the blink of an eye. She would recall in 2015 how it just left. It wasn't there anymore.

According to later witness statements, people along the highway would pull their cars over and leave their vehicles. Everyone was eager to get a good look at this most strange object moving across the Poughkeepsie skyline.

In the meantime, the journalist, along with two other Poughkeepsie Journal editors went rushing to their third floor window of the newspaper's offices. Despite their prior warning of what to expect to see, all were still in awe at the black object, around five miles away and 100' from the ground, heading in their direction. On the underside of the craft, amber & red lights were glowing. The journalist would later recall how large the object was by comparison to how slow it was moving. It certainly shouldn't have been flying at such low altitude over what was essentially a residential area.

When the object was to within a few miles, the lights suddenly shut off. It then, would head directly towards the newspaper office building. It must have suddenly increased its speed as the thing got huge very fast. In fact, it would fly over the top of their building. From there, they would rush to the other side of the office to see if it was visible from the other side. When they couldn't see it, they then made the decision to head to the bathrooms which would allow a clear view of the top of the building.

It moved once again, forcing them to rush once more to the other side of the bathroom. Once more, they could see the UFO, before it once more changed direction and disappeared completely out of sight. All the while, the huge object, at least 200' wide, made no noise whatsoever.

Rushing back, the reporter and several other journalists marveled at the photographs captured by their colleague. And the many thousands of witnesses they could speak to. They would have the story of the century. Especially given their access to such news outlets as AP and Reuters.

Then, came the order the story was not to run. And according to everyone, the order came from on high. As if the reiterate that order, the following day several menacing chaps arrived at the Poughkeepsie Journal offices. Although no threats were issued, it was made clear that talk of UFOs was to be steered clear of. Bemused, and more than a little angry with the decision, journalists wouldn't write an account of the incident. But would, however, continue to investigate it privately. Nor would the incident be the last time such a craft was witnessed from the Poughkeepsie Journal building.

According to this reporter, around a year later in the summer of 1986 a huge saucer shaped craft approached their building. And like before, it hovered silently for several minutes. He would rush out of the building to his van to retrieve his telescope. As he did, he looked directly upwards and witnessed the boomerang object hovering overhead with the first craft. He looked around. There were three other people in the parking area. All of them saw the object above. Then, both of the objects disappeared. He would recall they must have been traveling over 500 miles per hour easy.

Accordingly, the boomerang object chased the circular object away and did so in full view of onlookers.

Perhaps what is more intriguing is that, according to this reporter, these sightings of the black boomerang date back to the start of the decade in 1980. He would also claim to have witnessed the strange and distinctly boomerang shaped object six times in total. In fact, there are several reports, one as far back as the late 1960s of strange, boomerang shaped crafts, several of which in the New Jersey & New York areas of the United States.

For example, shortly after midnight on the August 13, 1969 in Port Chester, NY, came a report of two solid boomerang shapes crossing the sky in formation. The sighting came from the resident of a 6th floor apartment in the area. They were out on the terrace of the apartment watching for potential meteors during the Perseid meteor shower. Suddenly a bright light appeared on the horizon. As his eyes focused, he could see two boomerang shaped things, one slightly ahead of the other but in tight formation.

The objects passed overhead of the apartment allowing the witness to see their luminous silvery greenish blue color. They would then vanish from sight, not at any point making a sound. The whole incident lasted no longer than two seconds.

At around 10:00 p.m. on the July 15, 1975 in Dover, NJ, a boyfriend and girlfriend witnessed several boomerang shaped objects hovering overhead. One was distinctly larger than the rest and would appear to have some kind of control over the smaller crafts. The couple, along with the girl's parents viewed the encounter for almost two hours before the objects disappeared.

A sighting of a boomerang shaped craft in Rochester, NJ in January 1980 even has all the hallmarks of an alien abduction following an implant recovered from the witness.

There does appear to be a significant increase in boomerang shaped UFOs in and around New Jersey in the 1980s. And while reports of these specifically shaped crafts decreased, some sightings still occur.

At around 7:00 p.m. on August 28, 1998 in West Islip, NY, for example, a husband and wife, as well as their two children, would report a large black boomerang low to the ground near to their house. The object would hover for around two minutes across the street from their home. They would watch events unfold from their back porch. The husband, who would make the report, would state that the object had fairly sharp angled surfaces. This exterior of the craft had the look of a rough surface similar to Velcro. He would also report that one of the wings of the boomerang appeared flexible as it rose and vanished out of sight.

Another sighting occurred on the evening of July 12, 2005 in Parsippany, NJ. Around 11:00 p.m. a boomerang shaped object with two lights in front, and a red light in the back was witnessed hovering overhead. The witness would claim the red light seemed suspended from the craft and was around 2,000' above the ground. It then accelerated and moved away at speed.

Around two years later, just after 11:00 p.m. on August 28, 2007 in the town of Glassboro, NJ, two witnesses would report seeing two bright lights coming from over a house as they walked through the residential area. These lights appeared out of complete darkness and had the appearance of boomerangs. The objects, extremely low to the ground, made a strange deep humming noise as they passed over the pair. They eventually disappeared out of sight behind the nearby trees.

One of the more recent sightings of these strange boomerang crafts occurred just before midnight on June 19, 2011. A parent and their 18 year old daughter were leaving a movie theatre in Parsippany and walking to their car. The teenager suddenly shouted to look up as she was doing. In the skies, to the east of the pair, was a very strange, huge group of orange, yellow and red lights glowing brightly. Together they formed an enormous boomerang shape with the wing tips facing downwards.

Although the witness couldn't see any specific detail of the craft, it was perfectly obvious that there was a solid structure behind the lights.

They would later estimate the craft to be the size of a baseball field. And was between 500' and 1,000' from the ground. It would hover, in complete silence, for around a minute. As they watched, an orb appeared on the right wing. At first, it simply remained motionless, but after a short time, it would travel along and around the shape of the object. Eventually finding its way back to the point it appeared.

Then, the craft began to disappear. However, the witness would point out that it didn't appear to travel away in the sky. Rather, it seemed to erase itself. The lights would turn off or disappear one by one in some kind of order. The final light was the one at the center of the craft, although the outline of the craft was still barely visible. When this final center light went out, though, the entire craft vanished and there was nothing left in the sky.