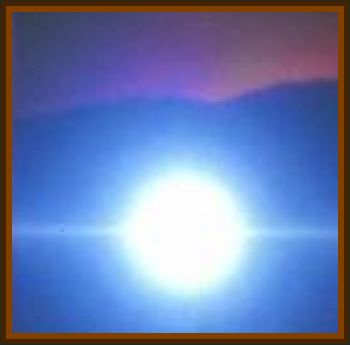 Went for an evening walk in a residential neighborhood in NE Portland.

While walking, I noticed a blue cast on a lawn. I looked over at the house thinking that it must be Christmas lights not yet taken down, but there were none.

Thought nothing more about it.

About 5 minutes later I again noticed the blue cast on a lawn. This time I looked up.

Directly overhead was a bright blue ball. Apparently it had been following me.

I stopped and the ball contined moving. I estimated it at about 100' above the ground, and about 2' to 3' in diameter. I based this estimate on a tree that it passed over. It moved very slowly for about a block, then banked left but continued moving.

When it banked left a bright orange light came on in the center of the ball. I watched it move for about 2 more blocks, then it simply disappeared.

I looked for search lights or any lights in the sky but there were none. I then became quite frightened and returned home. I retraced my steps the next day.

I revised my estimate of height to about 50' above the ground because the tree that I used for estimating was much shorter than it appeared in the dark.

I mentioned the blue ball to my brother who suggested that it might be ball lightning.

I checked the weather and there was some lightning in the Portland area that evening.

I have never seen anything like it before or since.

The blue ball was simply a beautiful background.

I'm older and recently retired, but at the time I was working as a manager for the State agency.