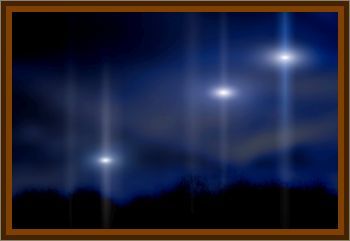 According to no less a source than The Oregonian, the first flying saucers, or whatever they were, were sighted directly over Oaks Amusement Park. Immediately, the police bureau put out an all cars alert, which was answered by three patrolmen who said they saw them, too. One of them, Earl Patterson, identified as an air corps veteran, said they were traveling fast, wobbling and weaving, and in his opinion they were not airplanes. The other two, Walter Lissy and Robert Ellis, both civilian pilots themselves, said what they saw were disks, making sudden changes in direction and traveling at a terrific speed.

Capt. K.A. Prehn, along with two of his men at Harbor Patrol headquarters on Irving, reported seeing several disks pass overhead at a height of 10,000'. They were unsure whether there were 3 or 6 of them because of confusing flashes from the objects, which seemed to oscillate, weave and turn until sometimes only a crescent was visible. Captain Prehn described the sight as a wobbling hubcap. A regular plane was in the sky at the time, the news account continued, but these were not planes, they agreed. Meanwhile, over at state police headquarters on Southeast McLoughlin, Sgt. Claude Cross reported seeing two objects that looked from a distance like toy balloons, almost pure white, traveling sideways, with no flashing lights. There’s the report from a United Airlines plane en route from Boise to Portland that night. Or as the headline at the top of the first page of the July 5 Oregonian put it:

Shortly after takeoff from Boise, World War II veteran Captain E.J. Smith, plus his co-pilot and a stewardess, spotted nine of them. Upon landing, Smith described them as bigger than aircraft, very thin, very flat on the bottom and rough or irregular on the top. The disks, which were flying at about the same altitude as the plane, followed them for 15 minutes before Suddenly vanishing. No object I know of could disappear so quickly, observed Smith The Oregonian’s headlines the next day read:

They just don’t write headlines like that over there anymore. But then, to be fair, we haven’t had a decent UFO flyby in a long time, either.