Woman Tells of Her Life Plagued by UFO Abductions 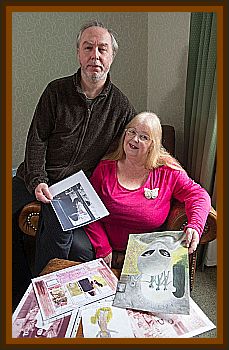 Hilary Porter claims she was first abducted by aliens aged five, and her life has been plagued by their visits ever since.

The 67 year old says she has been visited by creatures from other worlds more times than she can count including once when near Cardiff.

I have been an alien abductee all my life, Hilary said. I didn't choose this life. I didn't ask for any of this, but it has been happening for as long as I can remember.

Hilary was among more than 100 people at a national conference organised by the Anomalous Mind Management, Abductee, Contactee, Helpline Project, AMMACH. She shared her story and compared notes with others who claim to have similar experiences.

The first close encounter she recalls came when she was 5 and playing in the long grass in a field behind her home.

She told the Mirror:

Suddenly there was a reptilian alien in front of me. It had scaly skin, black holes on the nose and a little mouth.

It wasn't very tall, maybe 5' but very strong. It grabbed my arms and pulled me towards a disk in a depression in the field.

It dragged me underneath into a lift and the door slid closed.

The next thing I knew I was in a room with consoles and colored lights and little figures moving around.

Hilary, who once worked for the Ministry of Defence, is sure she was abducted while driving near Cardiff in the 1970s and again by a hexagonal spacecraft while hanging out bunting at a charity event.

She claims an alien broke into a top secret laboratory at a local Marconi plant while she worked there in the 1974.

After abductions Hilary said she suffers migraines and feels very ill. Sometimes she wakes up with fresh scars or bruises. Or there are bloody marks or stains on her clothes or bedsheets.

I’ve got a metal implant in my ear too, she says.

The doctor said it was wax but I can feel it. My partner Ken has a monitor that detects bugging devices. He puts it near my ear and it goes ding ding ding.”

Hilary told the full story of her multiple abductions at the Ammach conference.

Of course there are sceptics, people who laugh at us, but that doesn't bother me, she said.

Just because they haven't seen it with their own eyes doesn't mean it isn't true. We've had people from right across the spectrum tell us about their experiences, from university graduates to businessmen. They can't all just be stupid.

Hilary used to work as draftsman and artist for the MoD and decided to record her encounters by drawing them.

One of her pictures shows her as a little girl being dragged towards the spaceship. Another sketched in 1980 shows a shadowy figure standing just outside her window.

I had just put my daughter Sally to bed and came downstairs. Then I spotted a huge figure by the window. I froze.

After a few moments he raised his hand and I did the same. After that I wasn’t quite so frightened. I thought he wasn’t going to hurt me.

Then he glided to the back of the garden. He moved so fast. Woosh. Then he shot sideways, paused for several seconds, and was gone.

For years she suffered alone until a crisis abduction in 1994 when she says she was shown flashbacks of previous encounters.

Pushed to the brink, she started looking for other people with similar stories.

She met more abductees and as someone who can recall many experiences, she began counselling them.

Finding someone else who understood me was so important, Hilary said. You know you’re not off your trolley.

Ken said he believed the aliens were visiting our planet to take genetic material for breeding purposes.

There are greys, the ones everyone recognises, but they are just servants. The reptilians are higher beings, then there is a humanoid type, he said.

But there is something above them, cowled figures. You can’t look at them. Their eyes shine and when they look at you they blast a message into your mind. They tend to take females more for their eggs and genetic material for breeding purposes.

We believe they are making a cross between aliens and humans.

Hilary, of Farnborough, says her abductions have grown less frequent, but strange phenomena still plagues the area around her home, which has spectacular views over the Hampshire skyline.

She says she’s seen hovering triangular shapes and bright lights flying in formation which she has photographed.

She dismisses the idea that it could be military planes from Farnborough airbase, insisting they look and sound different.

Hilary spoke at the Ammach conference at the White Rock Theatre in Hastings on May 31.