Spherical UFO Over the Sea 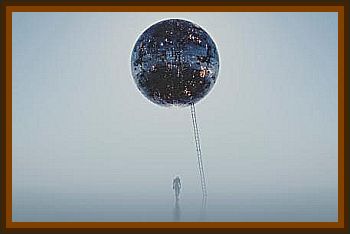 George currently resides in Whitehorse, Yukon and is the gentleman who has in his possession a slide of 7 glowing orb like UFOs taken over Tagish Lake.

Although he didn’t take the photo himself, we were pleasantly surprised when George had his own story to relate, back from his youth, when he lived in British Columbia on Vancouver Island.

It was about 1937 or 1938, when George would have been in his late teens. He was commercial fishing in the Porlier Pass off the east coast of Vancouver Island in a 16' open boat. Porlier Pass is located between Galiano and Valdez Islands, about 10 miles east northeast of Ladysmith. It was daylight, the weather was dead calm, cloudy and misty.

Then, in the distance, perhaps 1200' away he spotted a whitish/bluish sphere hovering over the water. It was about 6' to 7' in diameter he figures. The object appeared to be following him and at one point was within 100' of him. He could clearly see it had a defined edge and that it was composed of a variety of blue tones.

He estimates that he watched it well over 5 minutes when it just seemed to dissipate. He had seen this object in the same general area about 3 or 4 times but this was the closest encounter he had with it.

He had always believed that it was a phenomenon called St. Elmo’s Fire.

Doing some research on this we found that St. Elmo’s Fire is a blue/violet or sometimes greenish glow often seen at the top of ship’s masts during thunderstorm conditions. It is different from lightning in that it is a continuous electrical discharge into the atmosphere from long metal objects which causes the air to ionize and glow.

It is a faint glow and it has to be dark out for it to be seen. It is always attached to a metal objects such as a ship’s mast or a lightning rod.

When George was shown the above information, he could clearly see that what he saw could not have been St. Elmo’s Fire. However, he did believe it was likely some other form of natural phenomenon.