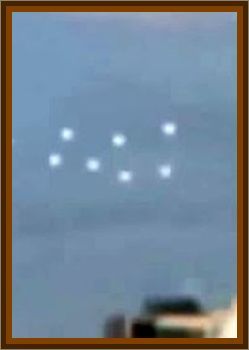 Around midday, pilot of Finnish Air Force Jouko Kuronen was rolling on the airport at Pori preparing for take off. Moments before take off he heard from the radio conversation between air traffic control and pilot Tarmo Tukeva who was already in the air.

Hey 286, stop your dive and go to check those seven balloons above you.

Jet pilot Tarmo Tukeva flies to check the balloons, and sees seven stationary objects about 5000' to 10,000' above the airport.

On the ground Jouko Kuronen turns his plane so that he can see the objects also. He sees seven disk shaped objects above the airport.

When Tarmo Tukeva flies closer to the objects, the objects started to accelerate rapidly north, Fouga Magister's jet flying 435 m.p.h. couldn't keep up with their speed.

Only a minute or so later objects were seen again with radar about 125 miles north in Vaasa.

Wind was blowing heavily from the north, day was bright and it was clear weather.