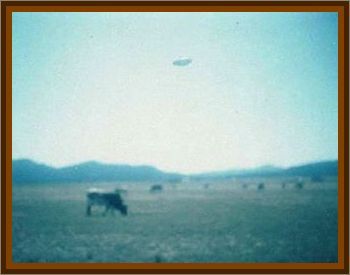 Madame Yvette Fourneret, walked toward a window to close it. The time was approximately 8:00 p.m., she saw, about 60' from the house in the Cazet's meadow, a luminous body which appeared to be balancing lightly in the air to the right of a plum tree, as if preparing to land. She estimated that the object was about 10' in diameter, elongated, horizontal, and orange colored. The glow from the object threw a pale light on the branches and leaves of the plum tree.

Frightened, she seized her son and ran next door to a friend's house where they tightly closed the door. At that point, two neighbors arrived, and seeing how frightened the women were, asked and were told what had happened.

Armed with shotguns, the men ran toward the meadow, but when they arrived there, they found no object, but rather a very strange hole.

Mr. Fourneret had been at a meeting at the Mayor of Poncey’s house and was sent for. The men then went about examining the hole in Mayor Cazet's meadow. What they found was strange indeed. An area measuring 27' wide at one end and 20' inches at the other appeared to have been sucked up.

White worms wriggled on the fresh soil of the hole, and the earth that had been torn up was scattered all around the hole in clumps 10" to 12" across over a radius of approximately 10'.

On the inner edge of the hole, similar clods hung down, and the soil had been pulled out in such a manner that about halfway down, the aperture was wider than at ground level. There was no trace of any instrument which could account for the extraction of the earth and also the tiny roots and rootlets in the soil were intact everywhere on the surface of the hole. None had been cut, as would have been the case had an excavation taken place.

Another detail was outstanding, in the center of the holes lay a plant with a long root which was still attached by the end of the root to the soil at the bottom of the hole with all its rootlets exposed to the air and completely undamaged. It appeared that the mass of earth spread over the surrounding grass had been sucked out by a gigantic vacuum. The same was true of the earth which was strewn about on the grass. There were no cut roots, no trace of an implement, no evidence of burning, and no impressions in the ground. Many attempts were made to duplicate the hole but were met with no success.

During the next few days, it was learned that many of the citizens in the area had seen a luminous object rise on one side of Poncay and shoot off into the southeast at 8:00 p.m., indicating that they had likely seen the same object that Mrs. Fourneret had seen hovering above the ground in Mayor Cazet's meadow.