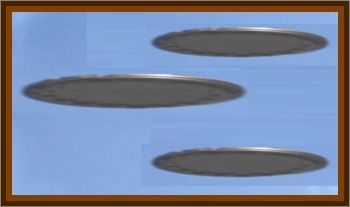 Mrs. Pollard, while sitting on her porch saw a large round object in the sky and then two more objects in back of it.

The objects had the apparent size of an orange or grapefruit held at arm's length and were white silverish in color and slightly oval then elongated when disappearing. The objects were in a triangular formation 35º to 40º above the horizon. They moved in a floating motion from west to east on a straight flight path.

The length of the observation was 3 to 5 minutes. Later at about 8:20 p.m. the Greater Pittsburgh Control Tower had a report of unidentified flying objects. Two aircraft, Vanguard Target and Vanguard 11, were vectored to the scene.