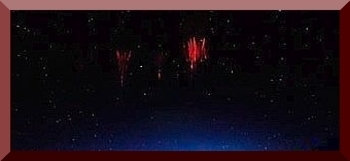 As far as now there are any other information about other possible sightings of similar object.

Additional information will be revealed in further publications concerning this case. The sighting was witnessed from a place located on Polish side of the border by a guard.

Yesterday I worked on a third shift and being on a round of a vast area I noticed a strange star like object over Czech Republic, at right from about 300'. high chimneys, bordering with Polish Godow, several miles behind them.

It was suspended several dozens of feet over the ground, at an altitude lower than that of the chimneys, and shone as a star with red light. It resemble a star Antares with its blinking but the object was much more brighter. Its brightness wasn’t constant and varied from -1 mg to -2.5 mg in the late phase of the observation. The object was suspended motionless in the air for first 2 minutes and then began vertically coming down making its very slowly. When it was descending it showed further discrepancies in its brightness and it was clearly visible that it shone alternately with red and yellow light.

During the last seconds before it vanished it dimmed, being hidden after rises of the area and was barely visible. Then being very close to the ground it lit up with intense and glittering brightness. Then it dimmed again disappearing after hills.

At the time of the observation I estimated that the object was 15 miles away, it seemed to be several miles behind those Czech chimney that are positioned about 12 miles from the place of observation.