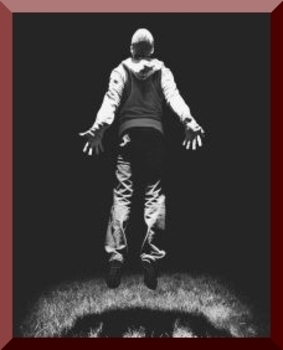 When I was young I had some very strange experiences which affected my entire life. This was in the 1930s.

In 1935 I had pneumonia, which in those days was a dangerous and sometimes fatal disease. One evening, right at dark, two beings came to the window in an elongated envelope. They and their conveyance were like the Northern Lights.

They asked me to go with them, and each took a hand.

When they touched me it was like being lightly tickled, very pleasurable.

The odd part was that you could see through them, but they were there and we talked without sound.

They took me to a huge pavilion where couples were dancing. My impression was that the males were dressed in black with white trim. The females were dressed the opposite way. There was no ceiling, but crystals hung above and made music beyond comparison, that sounded to me like wind chimes.

I had three visits to this place in all. On the last visit, a female asked me why I was afraid of the dark. She said to me that both the light and the dark are my benefactors, and they would make them equal. She took a crystal and placed it in the palm of my left hand. For a moment it resembled the Star of David, two triangles, then it melted and ran between my fingers.

After that, my night vision changed. My eyes would adjust quickly so that I could see even when it was pitch black. I recovered quickly from my illness.

A few months later, on a camping trip, I found I was the only one awake late at night watching undulating shafts of bright light. The shafts of light began a strange seemingly patterned movement. I was trying to puzzle this out, when suddenly there appeared my transparent envelope and what looked like an oval cylinder.

It just seemed correct to get in. In an instant I was inside the pavilion again but the beings were not dancing as before. They seemed to be conversing silently, but not with me. A female asked me to step up on the dais because I was their conductor.