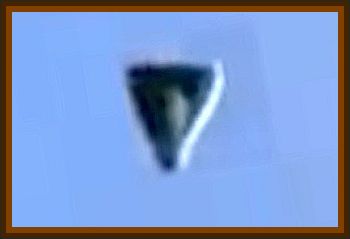 It was my younger sister who alerted us, my mother and I, to come and view a large 4 sided trapezoid, like an inverted cone with a triangular rather than flat bottom.

My sister saw more of it than I saying she saw lit up windows on it and it was apparently following a dash 7 commercial airplane on route to land at Plymouth airport.

By the time I and my mother came out to see it, it had moved over the other side of Whitleigh valley and seemed to have descended to a very low height, skimming over rooftops. I estimated its size to be about 100' to 150' across. The top of it had 2 red lights which moved from the object’s 2 top corners in sequence towards the apex of the upper point of the inverted cone and back down again to the corners.

As it was night this was the only way it could now be tracked as the lit windows were not observible. My mother and I watched this silently slow moving UFO traverse in a north easterly direction until it faded from view.

The local paper the next day reported that a couple of women in a car had also observed this object and attempted to follow it as far as they could in their vehicle. I believe it had also been observed flying over the local naval base which is a refitting yard for nuclear submarines. There have been numerous other sightings of UFO’s around this dockyard area.

I was most impressed by the object’s size and ability to float silently and so low over the Whitleigh and Crownhill estates apparently mere metres above the rooftops!