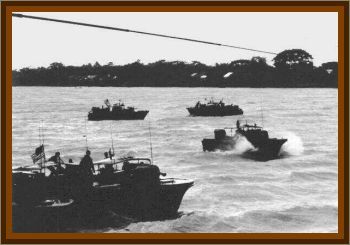 Location: At Sea - Off Coast Of Vietnam

I spent years on a ship, in plotting, during the Vietnam era - 1966 to 1968, where I used all available equipment to track and plot each aircraft over and off Vietnam soil. This sighting was in 1966, not sure what month.

One time I swear someone, or something, saved our guys on four River Gun Boats, three man crews, when around 3:00 a.m. they did their best to hold five North Vietnam junks full of guns and explosives until the sun came up so they could check them for weapons and such and to also take prisoners.

I was on duty on the Bridge with my flak jacket and helmet when suddenly just before the sun came up all hell broke loose. The junks all began to fire at the River Boats, at me too. The River Boat crews held their own as best they could, but I saw several of the crew hit badly during the fire fight.

All of the sudden four of the five junks were blown out of the water by some unseen friend overhead. They just exploded into oblivion, no residual left. I saw only one flash, what looked like a lightning bolt, hit a Junk and it exploded.

I hit the deck when bullets from the junks started hitting all around my head. The last junk gave up quickly, and our ship took credit for the save.

I saw it. I know we did not do it, but since truth is stranger than fiction I left it at that.

Thank you friends whoever you were. You saved our guys.

Unfortunately, all I have to offer is my word, no pics. I had pics, though not of the unseen craft that fired on the junks. I took pics because that was part of my job to document the firing activity of our ship, but we were never allowed to keep a private camera. Because of what we saw daily with the Russians. The only pics I had were OKd by the reigning head of Naval Security Headquarters at ComSecGruAct West Pacific Station, Yokosuka, Japan.

Wish I had hidden a few rolls, they were something to see.

I attest to this as fact, and to other sightings during various conflict actions during the years 1966 thru 1968 in and around the Vietnam conflict area when I served aboard a U.S. Naval vessel.

When on duty in plotting I saw numerous blips on my screens that we all knew were not our aircraft and had no idea who’s they were. I assume some of these blips were our unseen friends who saved our guys. I know there are other military personnel who can also attest to such happenings during this same period because being Naval Security, I heard the stories.

I hope they have the courage to come forward as I just have and risk the humiliation.