UFO in a Street 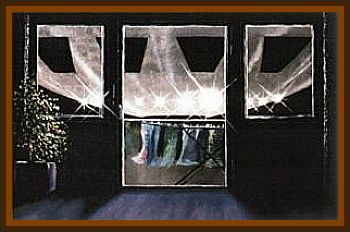 One of the characteristics of the UFO phenomena appears to be the fact that most sightings occur at night in rural areas when nobody seems to be aware of unusual things in the sky.

They seem to appear in the sky when most people are at home in front of their television. Nobody really seems to expect UFOs between high rises in the inner city limits. But this is exactly what happened on Saturday evening on May 21, 1994, in the city of Plauen. The city of Plauen is located about 155 miles east of Frankfurt and has a population of about 100,000 people.

The 39 year old postal worker Mrs. H. was watching TV by herself in her first floor apartment, which is part of a high rise community near the city center. Her daughter was out for the evening enjoying the local discotheque.

After her movie ended at about 11:00 p.m., Mrs. H went to her balcony from where she has an unobstructed view of the road and the disco. It was getting late and she was looking out for her daughter. As she stepped outside she noticed a bright light about 5 m to her right in front of the balcony. She realized that the light surrounded a small 9 year old oak tree like an aura.

The little tree was surrounded by other small trees, but none of the other trees were illuminated and it was also the only one that was swaying back and forth in the wind. Mrs. H. felt the strong wind and was surprised that only the illuminated tree was moving with the wind. The other trees were not affected, but this one was touching the ground at times and seemed to have a terrible struggle against the wind.

Mrs. H, looking for the source of the wind, spotted a big luminous object approximately 300' away, hovering at an altitude of about 100' just above the building. It looked to her like 2 frisbees stuck together, turning in opposite directions. The bottom part had small, dark squares that looked like windows under which a circle of white lights rotated in a clockwise direction. The top of the object had a circle of white lights as well, but these were turning counterclockwise (Fig. 1).

After about one minute the wind stopped blowing, the light around the tree disappeared and the tree went back to its usual upright position.

The object appeared to be about 30' in diameter, it suddenly moved to the left and disappeared behind one of the other buildings. One moment later the object came back around the same corner and moved in front of the building, only to disappear behind the building on the right. Mrs. H. ran into the street so that she could follow the object.

She observed the object vanish a few hundred meters away, above some other apartment buildings. Mrs. H. noticed that other people in the street had been watching the object as well as about 5 couples who were standing on their balconies. She did not talk to any of the other people because:

I really don’t believe in those kind of things.

Mrs. H. estimated that the whole incident took about 6 minutes.

At about 11:15 p.m. the telephone woke Mrs. Martina S. who was already asleep together with her 4 year old daughter in their 11th floor apartment. Her friend, Mrs. A., who lived in the same building on the 3rd floor, was very excited on the phone, saying:

Martina, I think there is a UFO above our building.

Mrs. A. had observed the unusual object from her 3rd floor balcony and wanted to know if her friend could see the same thing from the top floor.

And was about to put the phone down when she heard her friend exclaim:

It’s coming back again, look at it yourself.

This caused Mrs. S. to walk to the living room window, with the phone in her hand, where she saw for herself a very large object hovering in front of her window. The object was only about 15' in front of her and looked like a shiny, silver metallic structure to her.

Mrs. S. also noticed the 2 counter rotating light rings and some dark windows on the object. She said:

It seemed like the object was about to land on top, of the building.

Mrs. S. dropped the phone, got her daughter and ran down to her friends apartment on the 3rd floor. After a little while they carefully went towards the balcony, and eventually ventured all the way out onto the balcony, to observe the object from below. They felt a strong wind coming from the object and noticed that there was a hole in the cloud cover above it, which they assumed was caused by the object.

The object moved up and down like a yoyo for a few minutes in the same place before it proceeded to a higher altitude, where it tilted on its axis and sped away in a north easterly direction. During the incident Mrs. S. called her sister in law, who lived in another suburb, and told her about the observations. Her sister in law spotted the lights as well and proceeded to capture the phenomena on video.

The local newspaper reported the incident the next day, but explained it as reflections from disco spotlights in the clouds. Because of this report, Mrs. S’s. sister in law erased the video recording a few days later.

A police officer who is the husband of a coworker of Mrs. S., told the ladies confidentially that the newspapers explanation was not true.

Another interesting observation was discovered the next day. Both Mrs. H. and Mrs. S. independently reported that both had laundry drying on their balconies. Apparently all items of clothing were covered with black soot and had to be washed again.

Mrs. S. was so disturbed by this incident that she did not feel safe in her apartment anymore. She talked about hearing footsteps and strange noises as well as seeing lights inside her apartment after the incident. This frightened her so much that she moved to another apartment some time later.

When she was interviewed in December 1995 she was still so scared of the place that she refused to accompany the interviewer, even for a minute, to her old apartment.

The interviewer distributed 500 questionnaires in the area, as a follow up to the investigation. Only one other witness replied. He confirmed the ladies’ description of the object as well as the hole in the cloud cover.