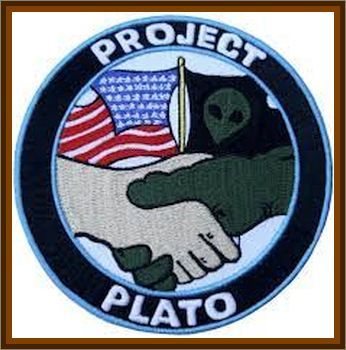 Project Plato was created in 1953 when through Sigma contact was first made with alien spacecraft orbiting the planet.

On Feb. 20, 1954, Project Plato secured a formal treaty (illegal under the US Constitution) with the aliens. The terms were that the aliens would provide the US government with technology. In return the US agreed to keep their presence on earth a secret, not to interfere in any way with their actions, and to allow them to abduct humans and animals. The aliens agreed to furnish MJ- 12 with a list of abductees on a periodic basis.

According to Val. Valerian this treaty was renewed, again within the Plato framework, on 25 April 1964, at Holloman AFB, New Mexico. It is possible that this resulted in the exchange, from 1965 until 1978, of ambassadors, under the project Crystal Knight.